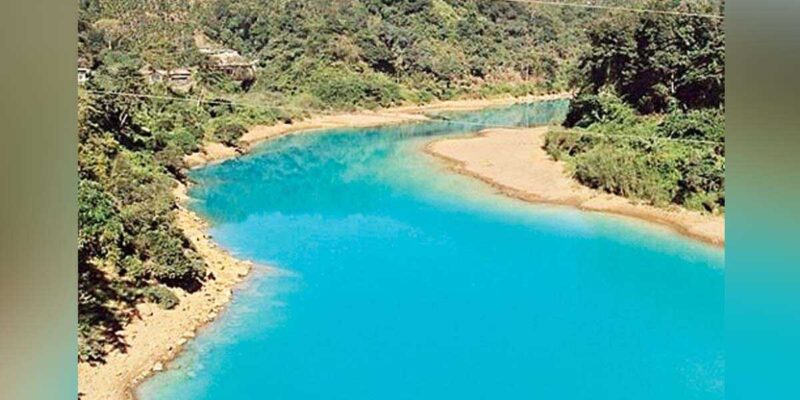 Meghalaya, Dec 26: Hundreds of fishes and fingerlings died and were found floating on the ‘mysterious blue’ waters of river Lukha in East Jaintia Hills district of Meghalaya.

Villagers from Narpuh Elaka in East Jaintia hills the district informed that hundreds of fishes were found dead and were seen floating on the surface of the ‘toxic’ river.

The villagers undertook boat ride on river Lukha for a closer look at the incidents of fish deaths in the ‘toxic’ river in East Jaintia hills. Between Khaddum village and the Sonapur Bridge, the villagers found hundreds of dead fishes on river Lukha.

Apparently, there are reports of fish deaths in the river Lukha during the last one week south of the Khaddum village.

“Death of the fishes is not a good sign. This river, which has been home to several hundred species of fishes, have turned a killer,” Kwillness Suchaing, president of Narpuh Unit of Khasi Students’ Union (KSU), said.

The KSU unit on Monday had submitted a memorandum to E. Kharmalki, deputy commissioner of East Jaintia hills district to conduct a ‘scientific study’ and find out the root cause of the changing colour of the river Lukha.

Since 2007, waters of river Lukha turn blue during the winter months. But, this year, the water quality has reportedly deteriorated further, and has turned ‘deep blue’.

Worried with the rising level of toxicity of Lukha, the KSU has set a deadline of three weeks to the Meghalaya government to identify the cause of the ‘blue water’ and find immediate solutions.

“Otherwise, we will be forced to take actions,” Suchaing said, adding that the cement factories around Thangskai and Lumshnong are the main cause of the pollution in the river system in East Jaintia Hills district of Meghalaya.

While aquatic flora and fauna have been destroyed due to the ‘toxic’ water of Lukha, two cement companies Topcem Cement and Star Cement has been accused of ‘polluting’ the river system.

In East Jaintia Hills district of Meghalaya, Topcem Cement and Star Cement are the largest producers of cement.

Meanwhile, the toxic ‘blue’ river Lukha is believed to be the main cause of extinction of a critically endangered fish species in Bangladesh’s Sylhet district.

The fish species — Goalpara Loach (scientific name: Neoeucirrhichthys maydelli), which was once found in abundance in river Lubachhara (downstream of Lukha) in Bangladesh, has reportedly ‘extinct’ because of the toxic water.

While the cement companies have always been claiming that they were not responsible for changing the colour of Lukha River, according to experts Calcium Carbonate slush from limestone mines can change the colour of the river waters to ‘blue’.