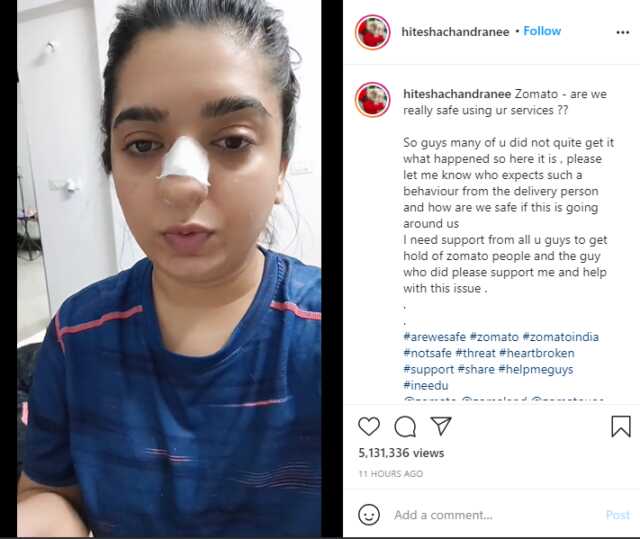 Bengaluru, March 11: A Bengaluru-based content creator Hitesha Chandranee on Wednesday alleged that she was punched by a delivery boy from the food delivery company, Zomato. Hitesha Chandranee, who posted a video on social media, alleged that incident happened on Tuesday, following an argument over a delay in delivery. She claimed the delivery person barged into her house, verbally abused, and assaulted her resulting in a fracture to her nasal bone.

The woman registered a complaint with Bengaluru’s electronic police at the station, based on which, the delivery executive was taken into custody, said police.

In the video, Chandranee claimed that she placed an order on the Zomato app around 3.20 pm. Even after an hour, when she didn’t receive the order, she contacted support to cancel the order or provide a refund.

As she was talking to customer service, the delivery person arrived; she took the order, but when she told him to wait, she claims, he started abusing her.

“He started screaming at me, saying ‘Am I a slave or what? You are asking me to wait here.’ It was really threatening for me. I tried to shut my door but he pushed the door, took my order from the table by entering my home, punched me in my face, and ran away,” she said.

Chandranee said she has suffered a fracture of her nasal bone. “I was given high-power antibiotics and painkillers because of which I can talk… My eyes water and my nose bleed as soon as I start talking,” she added in the video.

Police said the delivery executive presented a different version of the story. “According to him, he wanted to hand over the food and get on with another delivery. The woman demanded a refund, which was beyond his capacity. As she refused to accept the order, there was a verbal altercation. When she tried to hit him with her sandals, he pushed her in self-defence, which resulted in the injury,” said an electronic city police station official.

Meanwhile, Zomato said that the delivery boy who allegedly hit Hitesha has been delisted from the platform pending an investigation. “We deeply regret this incident and apologize to Hitesha for this traumatic experience. We are in touch with her and are providing our complete support through the necessary medical care and investigation. Meanwhile, we have delisted the delivery partner from our platform.”

Earlier, Zomato responded to Chandranee’s tweets, saying: “We can assure you this is not the experience our delivery universe stands for. Our local representative shall be in touch with you shortly to help you with the police investigation along with assistance on the medical care required. We can’t emphasize how sorry we are, rest assured we’ll take necessary actions to prevent such incidents from happening in future.”