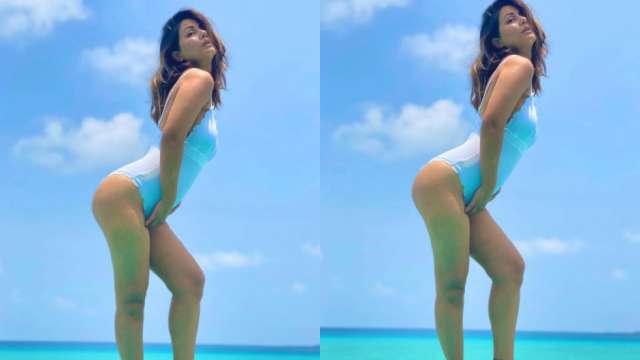 Maldives, March 20: TV actress Hina Khan is currently in the Maldives and is enjoying the tropical paradise to the fullest as seen on her social media. According to reports, Hina Khan had recently flown to the Maldives with her boyfriend Rocky Jaiswal.

For the past few days, the ‘Yeh Rishta Kya Kehlata Hai’ actress has been sharing picturesque snapshots of her island vacation with fans and the pictures are absolutely stunning!

Recently, she took to Instagram to share a series of photos in which she is seen posing in a blue monokini. The ‘Kasautii Zindagii Kay’ actress looked drop-dead gorgeous in the light blue monokini with her skin glistening under the sun. In the caption, she wrote, “Ocean Breeze at @kurumathiisland, Loving it” with a heart emoji.

Hina Khan was part of Bigg Boss 14 this year, which was entered as a “Senior“. She shot to fame with her role as Akshara in the popular television show Yeh Rishta Kya Kehlata Hai.

She was also a part of the renewed version of Kasautii Zindagii Kay 2, in which she played the antagonist Komolika.

Hina Khan was also seen in a brief appearance in the TV show Naagin 5, in which she starred as the titular shape-shifting serpent.

Hina Khan last starred in the web-series Damaged 2 and was last seen in Wish List, which she also produced.