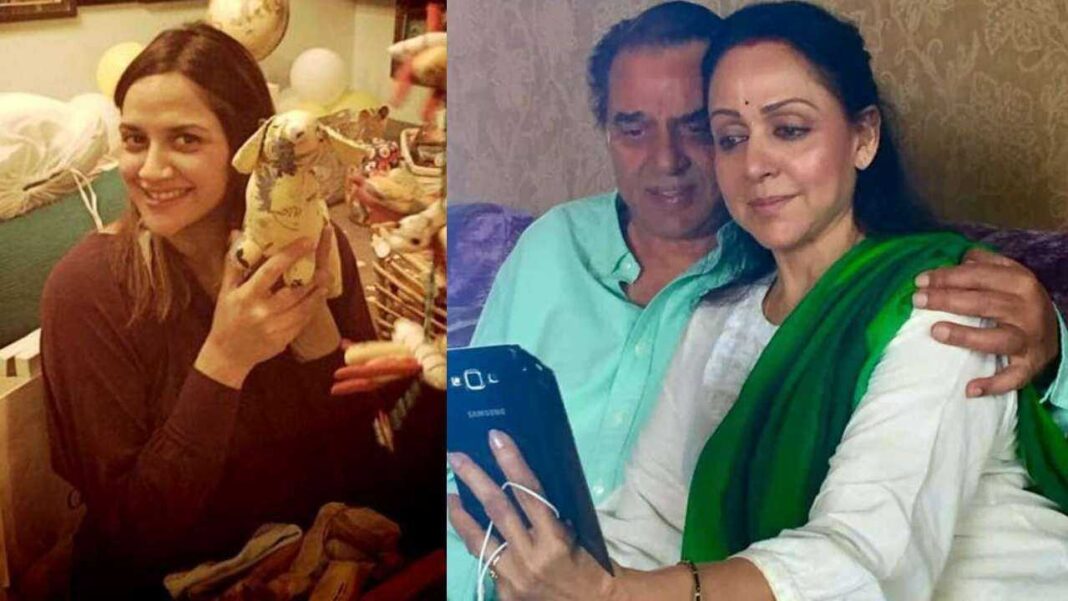 Ahana Deol shared on her Instagram stories an adorable announcement post, with the words, ‘sometimes miracles happen in pairs.’ They wrote that they were ‘proud’ to welcome the arrival of their ‘twin girls,’ who they have named Astraia and Adea Vohra. Ahana and Vaibhav have a son named Darien, who was ‘excited‘ about the arrival of the bundle of joy.

Dharmendra-Hema Malini and Vaibhav’s parents were termed as ‘Overjoyed Grandparents.’

Ahana had got married to Delhi-based Vaibhav Vohra in 2014. They were blessed with a son in 2015 named Darian. Ahana’s older sister, actor Esha Deol has two daughters– Radhya and Miraya Taktani. 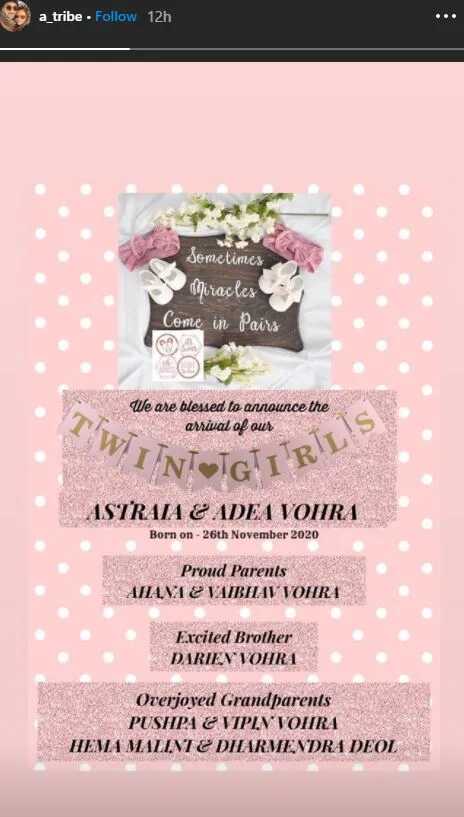 Though Ahana did not venture into films, she used to perform with her mother, actor-Bharatiya Janata Party Member of Parliament Hema Malini and sister Esha in their traditional dance acts.

Hema rarely shares pictures of her younger daughter but some throwbacks do feature her. Sharing one from the time the girls were young, Hema had written: “Weekend is a time to cherish with family. Sharing something close to my heart! Have a great weekend ahead.” Unlike her elder sister, Ahana chose to be away from arclights though early on, she did assist Sanjay Leela Bhansali in the 2009 movie Guzarish, starring Hrithik Roshan and Aishwarya Rai Bachchan.

Hema, who has had an active political career, does take time out for her family life. Only recently, she was in the news when she conducted a havan at her residence on Esha’s birthday amid lockdown. While she conducted the havan, she was guided by their family priest.

Sharing a bunch of pictures, Hema had written: “Esha’s birthday today. I pray for God’s blessings on her to be always happy and loved. As we do every year, we had a small havan at home and I sat with her to conduct the puja as directed by our family priest online. Love you @Esha_Deol, my baby.”