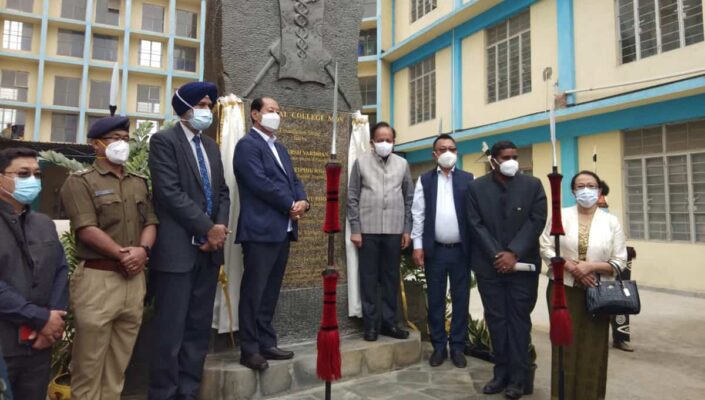 Speaking on the occasion, Vardhan underscored the holistic development of the northeast being planned and carried out on the ground under the visionary leadership of Prime Minister Narendra Modi, the health ministry said in a statement.

“At present, there are 562 medical colleges in the country out of which 286 are in the government sector while 276 are in the private sector.

“Another 175 medical colleges are also in the process of development. Against 52,000 MBBS seats in 2013-14, there are now 84,000 UG seats. Several medical commissions are also being set up,” the statement quoting the health minister said.

Around 1,50,000 health and wellness centres have been set up in the country, he said.

“This medical college is approved at a cost of ₹325 crore under Phase III of the centrally sponsored scheme for the establishment of new medical colleges attached with existing district or referral hospitals.

“The project will have a central share of ₹292.50 crore and is slated to be completed by 2023-24. The setting up of the new Medical College in Mon, one of the most backward and farthest districts from the state capital will help bring affordable secondary healthcare facilities to the doorsteps of nearly 2.5 lakh people,” Vardhan said.

Vardhan also lauded the efforts of healthcare workers in combating COVID-19 and said India is ahead of many developed countries in the war against the pandemic.

He also talked about the significance of the Centre’s Ayushman Bharat program in providing insurance to the last citizen.

He said the government aims to eliminate tuberculosis by 2025 from India and urged the state government to work to ensure the same, the statement said.

Chief Minister Neiphiu Rio during his address observed that the college will not only benefit Mon and Nagaland but also the people living in neighbouring states of Assam and Arunachal Pradesh and even Myanmar.

Noting that the college will be run by the state the government under the PPP model, he said the Mon Medical College in Nagaland is one of the 75 district medical colleges to be constructed in the districts of the country where people have been historically deprived of development and health facilities (due to their locational disadvantage), the statement added.