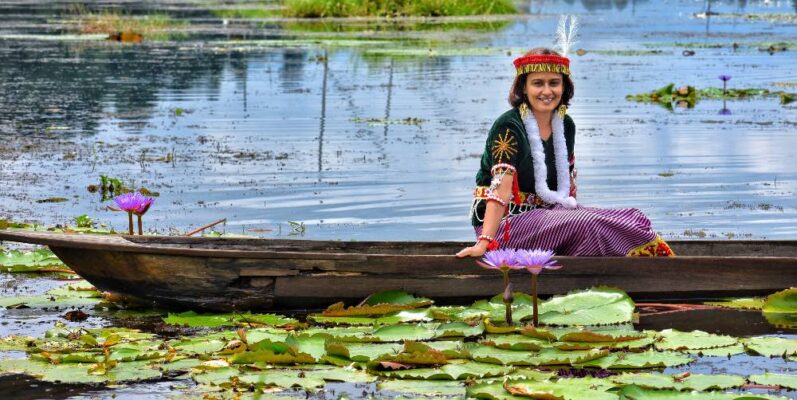 The event was organized by Ngamee Lup, a federation of fisher unions and other associations of Loktak and surrounding wetland areas including Pumlen and Khoidum Lamjao in coordination with Indigenous Perspectives (Imphal) and Environment Support Group (Bangalore) and hosted by Pumlenpat Ngamee Sinmee Lup.

1/n "We are at Pumlen Pat today to celebrate World Wetlands day. Pumlen Pat is located right next to Loktak lake, one of india's largest and most biodiverse lakes." – Sana Huque pic.twitter.com/WMZnrKRl6I

Meitei fishing communities have worked here over centuries to evolve a lifestyle that helps harvest fish and wetland-based crops and vegetables which forms the backbone of food security of the wider Manipur area.

Also, their carbon neutral living, involving dugout canoes and phumshangs – huts of bamboo and thatch built on floating biomass – phumdi, constitute a distinctive feature of Manipur’s living heritage, and of the world as well.

There is no other place in the world where fisherfolk live in floating villages as in the Loktak region. UN-Habitat has recognized this way of living as a model of sustainability for the world and Loktak Lake is a Ramsar site.

The Meitei communities have protected this wetland over centuries as a biodiversity-rich area. The critically endangered brow-antlered deer (Sangai) is endemic to this region. Besides, the massive wetland is critical habitat to migratory waterfowl from Europe and Central Asia who come here via the Central Asian Flyway and the Eurasian-Australian Flyway during mid-winter.

Hundreds of thousands of families live in this highly productive wetland complex respectful of nature’s ways and the limits she imposes. Instead of validating such ecologically wise ways of living – interwoven as it is with a deep respect for environmental and biodiversity conservation.

Governments of Manipur and India are now set on promoting projects that will irreversibly destroy this biodiversity-rich wetland complex and unique cultures and livelihoods associated with it. They involve involving massive investments in the form of the “Ecotourism project at Loktak Lake – 2020” and the “Loktak Inland Waterways Improvement Project – 2019”. Wetlands International through its South Asia division has supported such ecologically and socially destructive mass tourism and infrastructure projects.

Wetlands International South Asia (WISA) and Loktak Development Authority (LDA) have developed “Loktak Manipur: An Integrated Plan for Wise Use (2020-2025)” in July 2020 at the invitation of the Manipur Government. This is ecologically disastrous and socially disruptive and a patently unjust proposal.

The 231-page plan includes proposals for governance of the region led by parastatals, not democratic institutions, and an action plan that promotes the massive expansion of infrastructure for transport and tourism, extractive fishing based on industrial models of production, and a range of consumerist mass tourism. WISA’s plan includes proposals to set up factories in this eco-sensitive region to back extractive fishing, a move that would displace and destroy traditional and artisanal fisherfolk and farmers.

WISA in its ‘wise use’ plan has not in the least questioned the highly problematic Manipur Tourism Department’s 2020 “Ecotourism project at Loktak Lake” involving proposals to build golf courses ‘alongside the lake front’, the building of roads, jetties, and boardwalks in and around the wetlands, the development of a bridge on the way to Sendra like a Hump Bridge below which boat rides can be enjoyed, an ‘artificial beach at the bank of the lake’, ‘development of Loktak lakefront to attract tourists’ and to provide provision for resting and viewing of Loktak Lake and bird watching, etc.

WISA has also not discussed the draconian nature of Manipur Loktak Lake (Protection) Act, 2006 which criminalizes indigenous communities, their livelihoods, cultures, and traditions.  The organization In fact supports LDA’s position that fishing families who have lived on the lake for centuries are encroachers and occupiers. WISA and LDA report also make no mention of the floating village of Champu Khangpok inside Loktak which has been in existence for centuries and is registered as an electoral village by the Election Commission of India.

Shockingly, WISA’s plan is approving of the brazen November 2011 attacks by LDA and Manipur police on this unique floating village, which included burning their houses, destroying their boats and fishing gear, a horrific act of state-led violence on indigenous people that have left them traumatized. This human rights violation of indigenous people has been globally condemned, including by Ms Renata Lok-Dessalien, the UN Resident Coordinator of India.

WISA’s so-called ‘wise use’ plan tacitly embraces LDA’s ecologically and socially destructive model of developing the Loktak region into a major hub of mass tourism. Such proposals will not only destroy the wetland but will also annihilate hundreds of thousands of livelihoods intricately linked for their survival with this wetland complex and destroy one of the best bird habitats of the world.

Governments of Manipur and India, who are constitutionally bound to protect the Right to Life and Livelihood, have instead defended WISA and LDA’s highly problematic proposals in the High Court of Manipur. Thus disregarding grave human rights situations that will result due to consequential massive displacement of indigenous fisher, farming, and artisanal communities and wreck this amazingly biodiverse wetland complex.

The Governments were duty-bound to have held deep and extensive conversations with local communities, fish workers, and their unions, and by this process evolved plans to conserve the Loktak region for posterity.

Such plans should have also been the outcome of due democratic and transparent consultations with Panchayat Raj institutions, District Planning Committees (as per Article 243 ZD of India’s Constitution), and various connected government departments whose consent is mandatory. Governments of Manipur and India are comprehensively sidestepping these constitutional and statutory mandates in proposing reckless development of the Loktak region into a mass tourism hub.

The Indian Ministry of Environment, Forests and Climate Change which is the ultimate custodian for the protection of this wetland complex, has remained silent despite widespread outcry from local communities and the wide public.

Public documents reveal that Manipur State Wetlands Authority Loktak Wetland was kept in the dark during the development of plans by WISA and LDA.

The Authority appears to have been coerced to approve these proposals disregarding staunch opposition from its Technical Committee members. The members had demanded time to carefully examine the voluminous proposals – which they were denied.

Besides, they are opposed to the Supreme Court of India judgments that uphold the Right to Life, Livelihood and a Clean Environment, Public Trust Doctrine, Precautionary Principle, Principle of Ecocentrism, etc.

All this does not at all reflect well on WISA’s competence to represent and promote ‘wise use’ of wetlands globally which it claims as its core mandate. In fact, WISA appears to be allowing its position as a global institution promoting wetland conservation to be misused by the Manipur Government in promoting mega and ecologically destructive projects in the Loktak region.