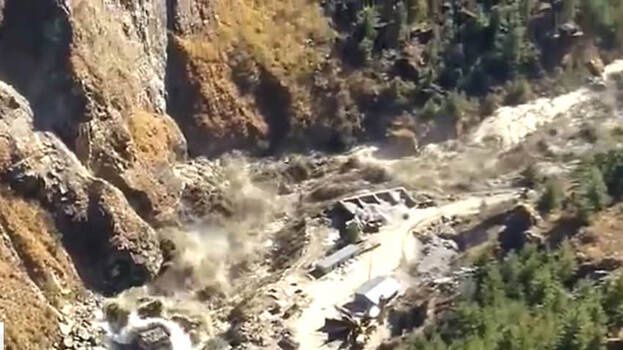 Uttarakhand, Feb 7: A massive flash flood in the Dhauliganga River was reported near a village in Uttarakhand Chamoli district, prompting authorities to launch a search and rescue operation and sounding an alert in all the districts downstream up to Haridwar, media reported on Sunday.

Hundreds of Indo-Tibetan Border Police (ITBP) personnel have been rushed to carry out rescue operations at the site near the Raini village, where some water bodies were flooded and destroyed many riverbank side houses due to cloudburst or breaching of a reservoir, an official of the border patrol force was cited. Casualties are feared, they added.

“A disaster has been reported from Chamoli district. The district administration, police department, and disaster management have been ordered to deal with this disaster. Do not pay attention to any kind of rumors. The government is taking all necessary steps,” Uttarakhand chief minister TS Rawat said in a tweet in Hindi.

“As a precaution, the flow of Bhagirathi River has been stopped. To prevent the flow of water of Alaknanda, Srinagar Dam and Rishikesh Dam has been emptied. SDRF is on alert. I beg you not to spread rumors. Pay attention to official authentic information only. I am leaving for the scene myself,” he added.

The chief minister also hinted at the possibility of damage to the Rishiganga project in Raini village and flooding in the lower areas of Alaknanda.

“There is a possibility of damage to the Rishiganga project in Rini village of Chamoli due to heavy rains and sudden water. There is also a possibility of flooding in the lower areas of Alaknanda due to sudden arrival in the river. People have been alerted in coastal areas. People settled along the river are being removed from the area,” he wrote on the microblogging site.

The water level in the Dhauliganga River rose suddenly following an avalanche near a power project at Raini village in the Tapovan area of Chamoli district.

The State Disaster Response Fund (SDRF) has also been rushed to the spot. “The local SDRF was informed at around 11 am following which three teams comprising about 30 men reached the spot to start the rescue operation. The avalanche has brought huge muck and debris to the river. The loss of life and property is yet to be ascertained,” Praveen Alok, SDRF’s spokesperson, said.