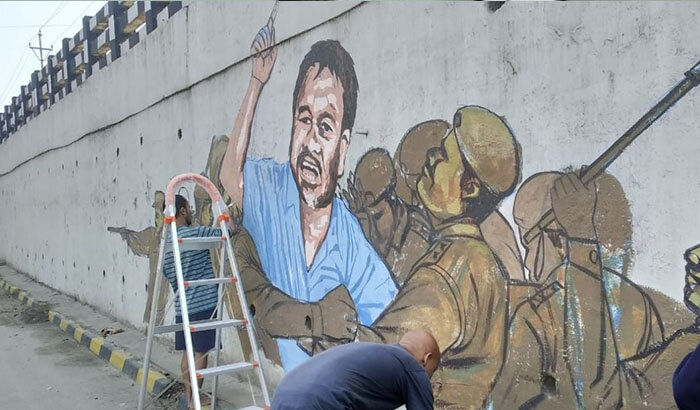 Assam, 20th November: The Guwahati Police detained four artists for painting graffiti of activist Akhil Gogoi on the wall of a bridge in the city.

The Akhil Gogoi belongs to a collective called Anga Arts. They were later made to erase their work.

The graffiti showed Gogoi being taken away by the police. The activist, who is also the leader of the Krishak Mukti Sangram Samiti, is in jail for leading a protest against the Citizenship Amendment Act (CAA) in December.

The artists who drew the graffiti were taken to the Basistha Police Station. Pranjal Kalita, the leader of the student wing of Gogoi’s organization, was also detained along with them.

Arrest of artist panting graffiti of akhil gogoi is really a sign of true Dictatorship
Is their any regulations of painting on wall by the govt?
If yes, than make it for all not for just people who think different than the govt@sarbanandsonwal @himantabiswa @CMOfficeAssam pic.twitter.com/yYxAACz2S3

Gogoi has been lodged at the central jail in Guwahati. He had tested positive for the coronavirus in July.

The National Investigation Agency had charged Gogoi under the amended Unlawful Activities Prevention Act. He was granted bail on March 17 by a special NIA court after the investigating agency failed to file a charge sheet against him within the specified period of 90 days. However, he was arrested again, just two days later.