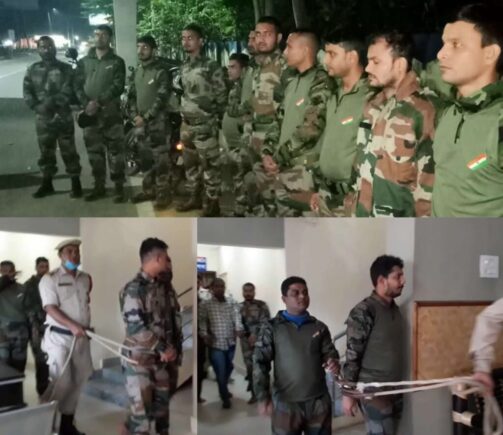 Guwahati, 18th November: Eleven fake army jawans who were dressed in army uniform and have not in possession of any valid identification have been arrested by Assam police near Guwahati international airport on Monday when moving around suspiciously.

The persons were nabbed by police from Azara station in Guwahati, where they were found moving around suspiciously near the Lokapriya Gopinath Bordoloi International Airport.

“A police party on patrolling duty detained four persons wearing army uniforms from near the airport on Monday. While asking for verification, it was found that they were not authorized to wear the uniform and had ulterior motives,” said a police statement issued on Tuesday.

Based on the information provided by the four fake army jawans arrested men, police arrested seven other persons who were wearing army uniforms without valid documents and were moving around suspiciously near the airport.

“During interrogation, it was found that one Dhriman Goswami had given them fake appointment letters to provide security at the airport. Goswami has been arrested with the 10 others. A search of the houses of the arrested persons has led to the recovery of some documents, ID cards, etc,” the statement said.

A case under various sections of IPC for impersonating army personnel, criminal conspiracy, counterfeiting government stamps, forgery has been lodged and further investigation is going on.