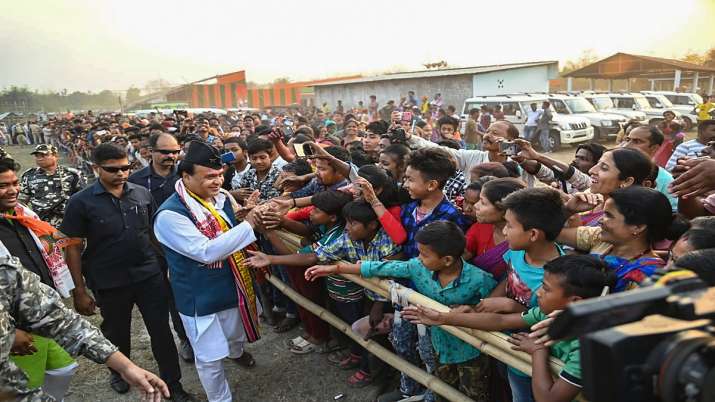 Assam, April 4: Granting relief to Assam minister and senior BJP leader Himanta Biswa Sarma, the Election Commission reduced his campaign ban from 48 hours to 24 hours on Saturday after he tendered an unconditional apology to the commission and assured to abide by the model code of conduct in the future.

The reduced ban period ended at 6.30 pm on Saturday and the BJP star Himanta Biswa Sarma campaign was back on the streets of Guwahati leading hundreds of supporters in a roadshow for AGP candidate Ramendra Narayan Kalita in Guwahati West constituency.

“I was campaigning in Kokrajhar last night when the EC order came. I have had good three hours of sleep after so many months,” Sarma said.

On Sunday afternoon, BJP will wind up its campaign in Himanta’s constituency with Amit Shah’s address at Suwalkuchi.

Also on Saturday, in an unrelated development, the EC shunted Himanta’s younger brother Sushanta Biswa Sarma, the SP of Goalpara district, to the police headquarters.

The EC has replaced him with an IPS officer Veera Venkata Rakesh.

Himanta, aggrieved by the 48-hour ban for having allegedly threatened Bodoland People’s Front chairman Hagrama Mohilary, sent a representation to EC on Saturday seeking modification of its ban order.