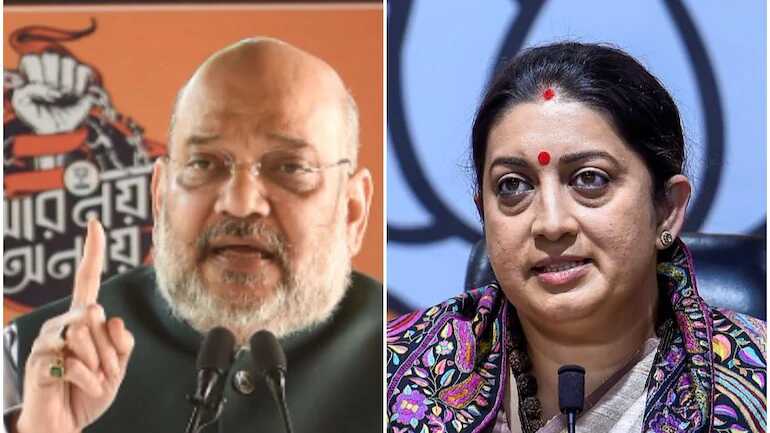 Bengal, Jan 31: Union Ministers Amit Shah and Smriti Irani hit out at Chief Minister Mamata Banerjee, Didi by saying that Bengal will not forgive her while speaking at a rally in Howrah on Sunday and said that a party that supports infighting and insults ‘Jai Shree Ram’ cannot retain any of its members.

Amit Shah said, “I’ve told Rajib Banerjee that we’ll form government in Bengal. Many leaders are leaving TMC. Mamata should introspect why. Mamata had promised ‘poriborton’. Look back at the past 10 years. Maa, Maati, Manush have faded into the background. Mamata Didi, Bengal won’t forgive you.”

The BJP leader added, “The way TMC, Left and Congress leaders are joining BJP, by the time the elections are here, Mamata Didi you would turn back and see no one.”

While Amit Shah addressed the BJP rally in Howrah via video conferencing, Smriti Irani, and others were present on stage along with the TMC turncoats. Ahead of Shah, Smriti Irani addressed the Howrah rally in Bengali even as a bunch of TMC leaders who joined the BJP on Saturday was seen cheering her on while sharing the stage.

Attacking Mamata Banerjee’s TMC, Smriti Irani said, “A party that supports infighting, that insults the slogan of ‘Jai Shree Ram’…. nobody can stay in that party.”

“I want to tell Didi that you may have abandoned the ‘Jai Shree Ram’ slogan, but under PM Narendra Modi, a Ram temple is being made, and Ram Rajya is knocking on Bengal’s doors,” said Smriti Irani.

Rajib Banerjee said, “We want double engine government in West Bengal. We want Bharatiya Janata Party government at both the Centre and state for Sonar Bangla.”