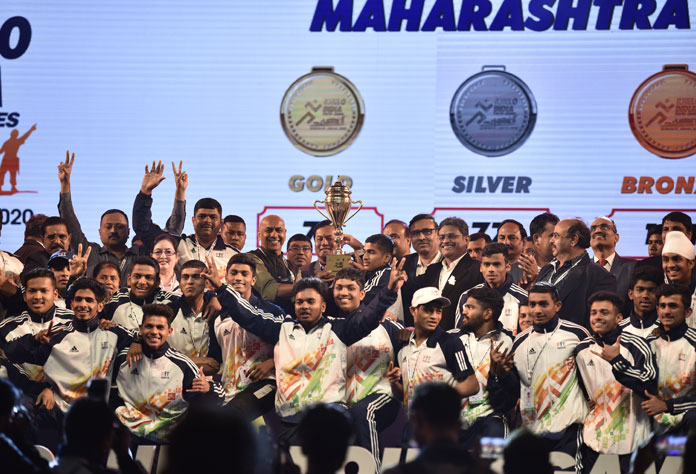 The picturesque city of Guwahati bid an emotional goodbye to the Khelo India Youth Games on Wednesday, crowing Maharashtra the unconquered champions during a power-packed and entertaining closing ceremony.

The defending champions romped to a whopping 256 medals, including 78 gold and 77 silver medals to underline their pre-eminence in a multi-game event of this scale once more time.

Assam Chief Minister Sarbananda Sonowal, and Union Minister of State, Ministry of Food Processing Industries Rameshwar Teli, presented the trophy to the winners even as a packed stadium rose to its feet.

“I would like to congratulate all the participating teams from across states and everyone who has been part of this journey of making Khelo India Youth Games 2020 a mega success. Over the past 13 days the city  was on song, witnessing some scintillating sports action. There was a feeling of competitive spirit and sportsmanship amongst all contestants and at the end we saw Maharashtra winning the championship. The tournament is a big boost towards achieving our Honorable Prime Minister’s  Shri Narendra Modi’s long term vision of Fit India movement. I salute the hard work of all  athletes that participated in the games as they will be the ones who will go on to bring major sporting  laurels for our country globally,” Sonowal said.

Union Minister of State for Youth Affairs and Sports Kiren Rijiju, Assam Finance Minister Dr. Himanta Biswa Sarma were among the many dignitaries and local celebrities who graced the occasion.

Union Minister of State for Youth Affairs and Sports Kiren Rijiju said that – “I congratulate all the athletes for their enthusiastic participation in Khelo India Youth Games in Guwahati. Congratulations to Maharashtra for winning the champions trophy two years in a row.”

“I am confident  that from among this year’s winners will emerge our future champions who will represent India at international events and even at the Olympics, in the 2024 and 2028 Olympics. Our motto has been to provide the best facilities and a world class experience to athletes at the Khelo India Games. This is the platform from which they are starting their sporting journey, and with the right grooming they will  evolve into international sporting icons,” Rijiju said.

Immediately after the awards ceremony, Assam showcased their rich cultural heritage in a crisp and beautiful show, led by a Modern Creative Dance performance by Aimee Baruah, Directed by Asim.

Before a range of local performers hit the stage, Chinese Martial Artists wowed the audience with their speed, power and elegance. They were specially flown in to mark the 70th year of the India-China friendship.

Performances by Tarulata Kutum with Missing Dancers, Sajan Nayak with Jhumuir Dancers and a solo by Babita Sharma set the mood for the evening.

Popular Assamese singer Jitul Sonowal too charmed everybody with his mellifluous sings.

In between, Krishnamoni Chutiya performed the Bihu Song which was beautifully choreographed by Pankaj Engiti, to the delight of the local fans.

The evening was topped up by a live concert by Bollywood singing star Shaan.

The Bollywood singer got the audience, including the athletes, on their feet as he belted out a series of his hit numbers.