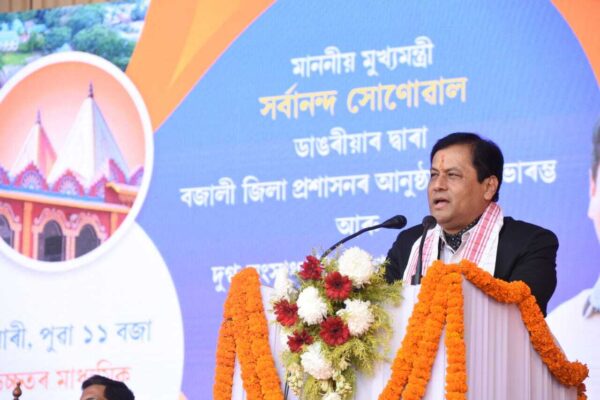 The chief minister also laid the foundation stone of Bajali Milk Processing Unit to be set up at Pathsala for Rs 4.68 crore under the Chief Minister’s Samagra Gramya Unnayan Yojna.

Speaking on the occasion, chief minister Sonowal congratulated the people of Bajali, which has become the 34th district of Assam.

The chief minister urged the people of the district to make Bajali one of the best districts in the state.

Sonowal called on the people of Bajali to spearhead this movement with the human resource as students in the area always perform well in every examination and excel in academics.

Saying that alleviation of Bajali to a district would facilitate better opportunities and facilities to the residents here, Sonowal stressed on the need to constantly improve oneself to achieve success in this age of competition.

Also Read: Assam to get a new administrative-district in lower Assam

He urged the young generation to excel in all fields like science, sports, academics, and culture so that the market of South East Asia can be captured with skills and knowledge.

Sonowal also highlighted measures taken by the state government in the last four and half years to develop the state and directed the deputy commissioner and superintendent of police of the district to facilitate people friendly administration.

The CM hoped that Bajali Milk Processing Unit, once operational, would be able to contribute towards the goal of making Assam Atma Nirbhar.

Sonowal formally kick-started the project of making Bajali a ‘neem city’ by presenting a neem sapling to the brand ambassador of forest and environment department, Ananda Khataniar.

Assam industry and commerce minister of Chandra Mohan Patowary in his speech said the struggle of Bajali residents for a district became successful under the able leadership of chief minister Sonowal.

He said the present state government has been making consistent efforts to equally develop upper and lower Assam regions with steps like setting up a multi-modal logistic park at Jogighopa among others.

Housed chairman and Assam BJP president Ranjeet Kumar Dass thanked the state government for making Bajali a district and he elaborated on the contribution of Bajali to the socio-cultural development of the state.