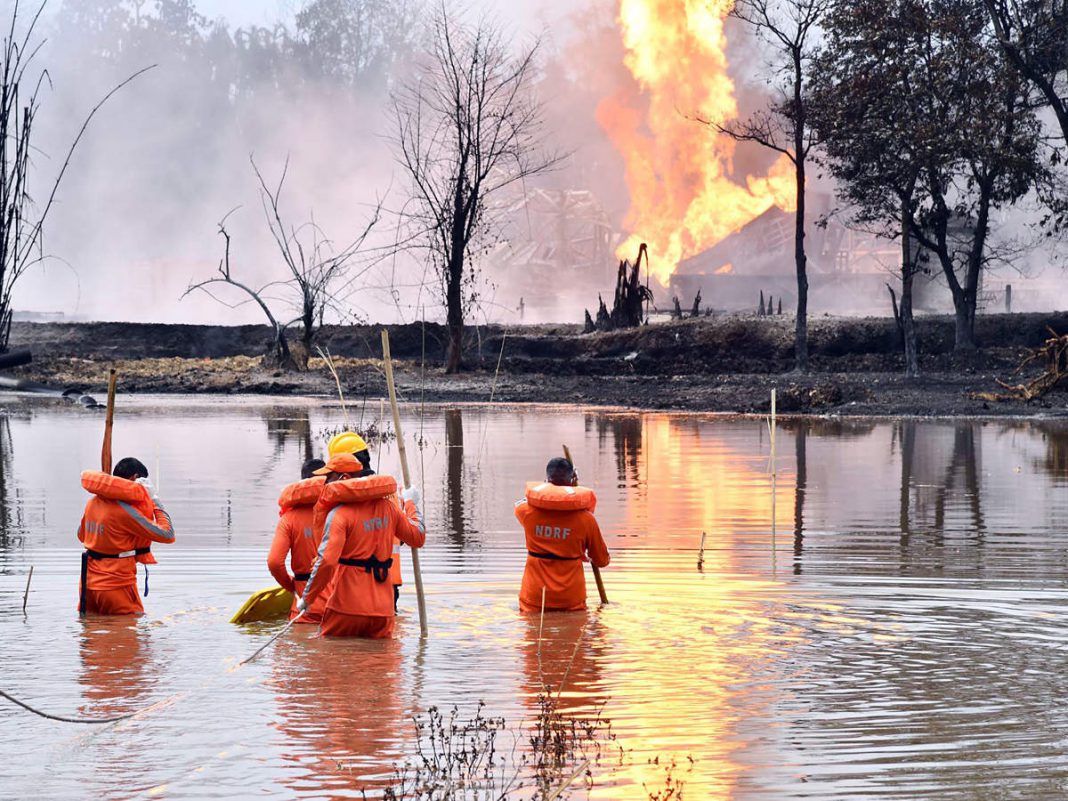 Guwahati, June 23: In a relief to the Oil India Limited(OIL), the Pollution Control Board of Assam (PCBA) has withdrawn its earlier closure notice on conditions which served to OIL on oil exploration.

Earlier on June 19, the Pollution Control Board of Assam (PCBA) came heavily on Oil India Limited following the fire incident at Baghjan oil field in Assam’s Tinsukia district and served a closure notice to the Oil India Limited on major oil exploration.

The Pollution Control Board of Assam (PCBA) had directed OIL to shut down all productions as well as the drilling operations at the site.

Following the PCBA notice, OIL moved the court seeking a stay on the closure notice.

In a letter issued by the PCBA on June 22 stated that – “M/S Oil India Ltd shall have to submit a detailed time-bound Environmental Management Plan within 15 (fifteen) days from the date of issue of this letter for environmental mitigation and extinguishing of fire at the Baghjan Oil Field and act accordingly. They have to apply for Consent to Operate (CTO) under Section 25 of the Water (Prevention & Control of Pollution) At 1974 and Section 21 of the Air (Prevention & Control of Pollution) Act 1981 separately for every drilling, production and other installations along with environmental management plan and requisite documents within 1 (One) month. They have to submit all the details of Hazardous Waste generated, disposed & treatment facilities as per the Hazardous & Other waste (Management & Transboundary Movement) Rules, 2016.” 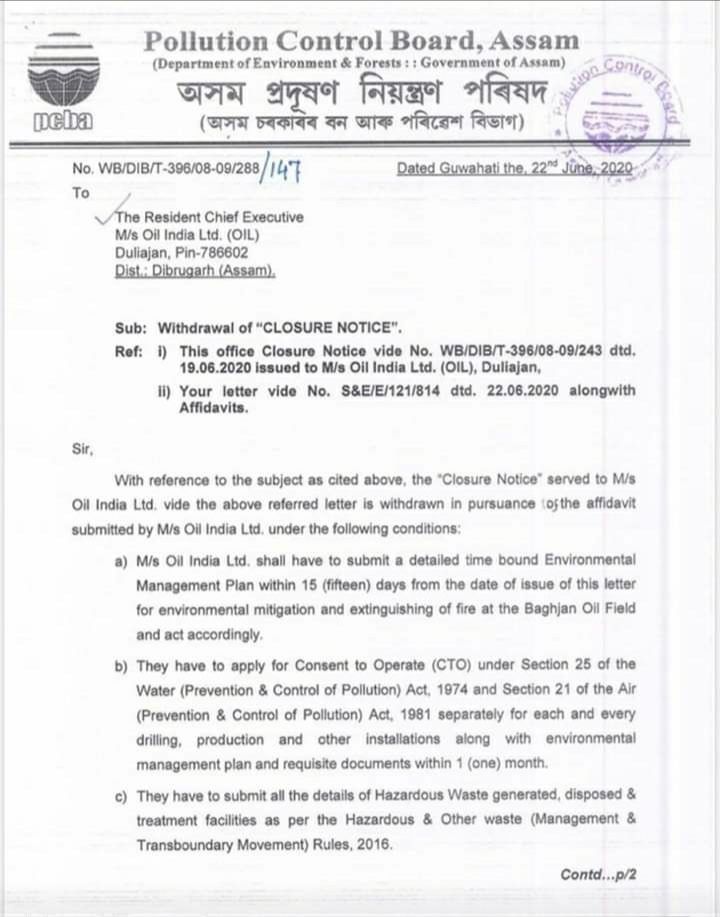 “They have to apply for Authorization under E-Waste (Management) Rules, 2016 and take necessary action for proper disposal of E-waste and they have to submit the return as per Batteries (Management & Handling) Rules, 2001 framed under the Environment (Protection) Act, 1986 within 31st July, 2020,” said in the PCBA letter. 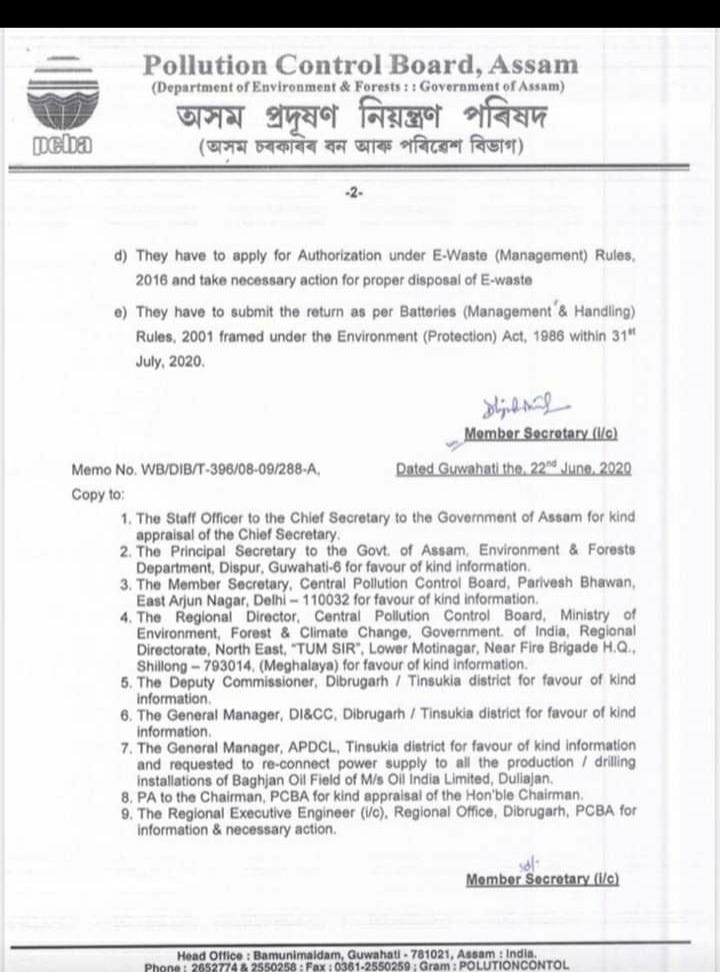 On the other hand, the Oil India Limited on Tuesday issued a press release and stated that the closure notice served by Pollution Control Board of Assam (PCBA) has been withdrawn.

“PCBA has asked OIL to fulfil certain conditions within specific timeframes. OIL will take necessary steps to comply with the directives/conditions of PCBA,” OIL said in the press release.

On the other hand, OIL said in the press release that, environmental Impact Assessment by M/s ERM: Air monitoring/ Noise monitoring/ Ecological survey continues to be conducted by M/s ERM.

“TERI Study on Air quality & Noise level: Data of air quality and noise level are being constantly recorded and monitored at the Analyzers installed by TERI. TERI study on Bioremediation of Sludge: Initial cleaning job as a part of bio remedial process is being continued in the affected areas. TERI is arranging Drone fly camera for aerial photography and videography of affected areas and survey will be carried out depending on weather condition. CSI-NEIST/NGRI Seismological study: Recording for geophysical monitoring of tremors is in progress from all stations. Analysis of data will be carried out in Jorhat and Hyderabad. Many important equipment/ materials are on transit. Consignments are delayed on transit due to ban on day time movement of heavy vehicles. Fabrication of Heat Shield: Fabrication of Heat Shields for Bulldozer and Excavator is in progress. There is a delay in developing the land due to inclement weather and soft soil condition. To mitigate the delay and make access to vehicles and placement equipment at the site. Portable deck mats for the purpose are on transit from Kolkata and Guwahati. Connections for sourcing water from Dangori River are underway,” OIL stated in the release.

The release also stated that two emergency Escape Routes from Debris Area and one from Kill pump area have been constructed and Alert team is inspecting the equipment at OlL CMT Yard with ONGC-CMT and OIL Technical team.

Oil India Limited further said that, OIL has facing a production loss of 8291 MT Crude oil and 10.56 MMSCM of natural gas due to bandh, stoppage blockades since May 27.

Two firefighters were killed and four others injured in the gas well fire incident at Baghjan oil field and over 10,000 people living in the nearby villages were forced to take shelter in relief camps.