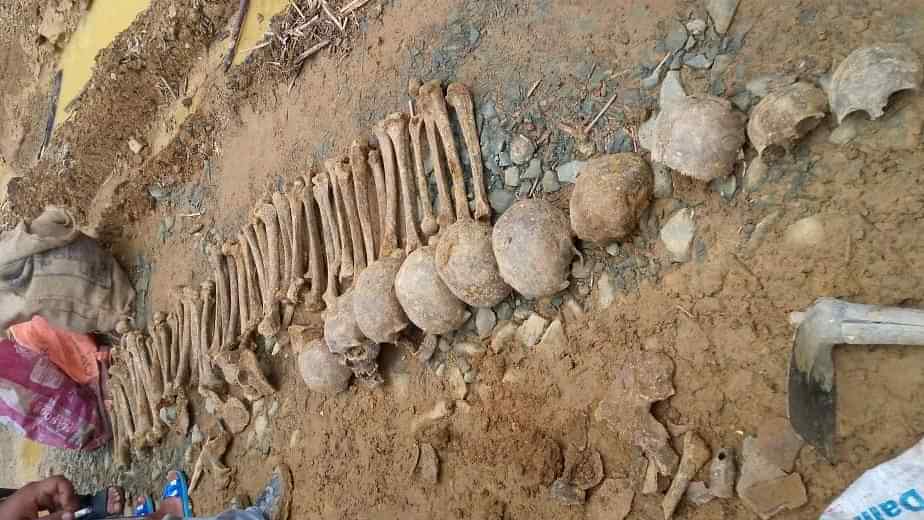 Aizawl, August 15: Human skulls and several skeletons that are believed to date more than a century back were unearthed near Tuidam village in west Mizoram,Mamit district on Friday. Lalrozama, a senior IAS officer who is himself a doctor of Medicine in forensic science, said that the skulls and the skeletons that were buried under the soil was unearthed after a landslide on Friday.

They fell down from above while the workers were clearing the debris of landslide on Tuidam to Kawrte road. Mizoram’s DIG of the Northern Range said that they were discovered 7 feet under the ground and it seemed to be of 12 to 13 adult people.

The remains of these skulls and skeletons were found inside earthen pots and it is believed to belong back to some period before 1900.

The police stated that they believe these to be of Mizo chiefs from the ancient days whose skeletal remains were put in earthen pots and buried after cremation. He also mentioned that an SDPO from Kawartha was sent to the spot to investigate the case.

“After collecting all the skulls and bones, they would be sent to the state forensic laboratory in Aizawl for examination and identification,” the Deputy Commissioner of west Mizoram told IANS over the phone from Mamit district headquarters.