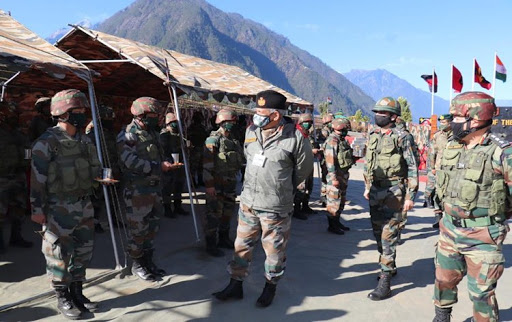 Official sources said General Rawat carried out an aerial survey of certain areas and was briefed about key aspects of the security matrix in the region by senior military commanders.

In a series of tweets, the Army said General Rawat visited forward air force bases in the Eastern sector and interacted with personnel of the Special Frontier Force (SFF), the Army and the Indo-Tibetan Border Police (ITBP) deployed at the “forward most air maintained” posts in Dibang Valley and Lohit sector.

On his second day of visit to operational areas of #ArunachalPradesh, General Bipin Rawat #CDS visited #Army and #ITBP personnel deployed in the forward most air maintained post along #Subansiri Valley in #ArunachalPradesh.(1/3) pic.twitter.com/Ja7pQ7lYFV

It said the Chief of Defence Staff (CDS)  complimented the soldiers for the “innovative measures” to maintain effectively surveillance and enhanced operational readiness and exhorted them to continue working with the same “zeal and enthusiasm“.

“#CDS said that only Indian soldiers could remain vigilant under such #challenging situations, ever willing to go well beyond the call of duty to safeguard the borders. Nothing can deter the Indian Armed Forces on remaining steadfast in their call for duty,” it said.

General Rawat arrived at the Dinjan air force station in Chabua in Assam on Friday afternoon.

The sources said that General Bipin Rawat will visit several other strategically located bases in Arunachal Pradesh on Sunday as well to gain first-hand experience of the security scenario.

The Army and the Indian Air Force (IAF) have significantly bolstered their combat readiness in all the key formations along the LAC including in Arunachal Pradesh and Sikkim in view of the border standoff with China in eastern Ladakh.

In November, Chief of Army Staff General MM Naravane paid a three-day visit to various formations under the Army’s Eastern Command and reviewed their overall operational preparedness. The Kolkata-headquartered Eastern Command is responsible for guarding the LAC in Arunachal Pradesh as well as the Sikkim sectors.