Home Assam BJP will lose at least 25-30 seats in the upcoming Assam Assembly... 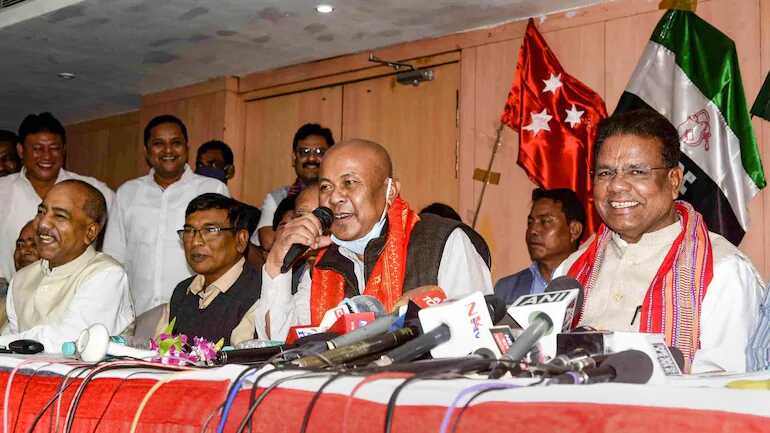 Talking to the media, BPF spokesperson Khampa Borgoyari also claimed that the BJP had won at least 28 seats in the 2016 assembly polls in Assam only because of the Bodoland People’s Front.

“In 2016, BPF brought BJP into power in Assam. We expected that BJP will bring change, reprobation, development, progress in the state. But what we have seen in the last five years, what they are doing, they are doing works against the sentiment of the people,” Khampa Borgoyari said.

BPF spokesperson Khampa Borgoyari went on to add, “There is aggression to our culture, language, tradition, the heritage of Assam. The BJP has brought the change of division in the name of religion, language, area. What they had done in the Bodoland Territorial Council (BTC) election, everybody has seen it. That is why BPF has decided to leave BJP, there will be no friendship with BJP and we have joined the Mahajuth and will work with the parties who are in the grand alliance.”

Khampa Borgoyari, who was the former deputy chief of the Bodoland Territorial Council, also said in the last BTC elections, the BPF had emerged as a single-largest party by winning 17 out of 40 council seats. The BPF, however, was not invited to form the council, he added.

Also Read: Assam: BJP looks to retain power but CAA could be a sore point

“BPF is limited within the Bodoland Territorial Area Districts [now known as Bodoland Territorial Region] and we are not going contest outside of the political boundary of the BTAD area. In Bodoland, there are 12 assembly constituencies and we will contest on those seats only. But we will support any candidate of Mahajuth in 28 seats that are outside of the Bodoland,” Khampa Borgoyari said.

The BPF leader further added that in the 2016 Assam Assembly elections, the BJP was able to win a few seats outside of Bodoland only because the BPF and BPF brought BJP into power in Assam.

“In the 2021 election also, the same thing will happen and Mahajuth will come to power. The BJP will lose 25-30 seats in the upcoming assembly elections,” Khampa Borgoyari said.