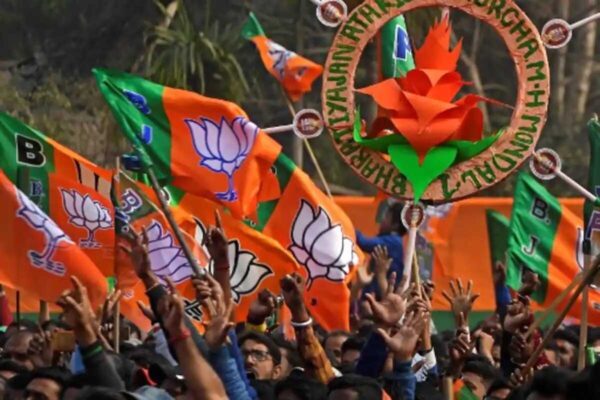 Kolkata, March 2: The BJP expects 10 lakh people to attend a rally at the Brigade Parade ground in Kolkata on March 7 that is expected to be addressed by Prime Minister Narendra Modi.

It will mark the culmination of the party’s ongoing Parivartan Yatra, which has been crisscrossing the state’s 294 constituencies.

Bengal BJP chief spokesperson Samik Bhattacharya said the party will reach out to all the booths and each booth worker will be invited to the rally.

Sources said the BJP is likely to hold another campaign against the “Duare Sarkar” campaign of the Bengal government highlighting its achievement. The party will attempt to counter the ruling TMC and its government through a door-to-door campaign from March 10 to March 17.

The Left-Congress-ISF alliance kicked off their campaign for the 2021 West Bengal Assembly Elections on Sunday with a mega rally at Kolkata’s famed Brigade Parade Ground.

Supporters gathered by the lakhs to support the alliance. The introduction of the ISF has turned the election from a bi-partisan battle to a triangular face-off involving the Bharatiya Janata Party (BJP), the ruling Trinamool Congress (TMC) and the Left-Congress-ISF alliance.

Former West Bengal chief minister Buddhadeb Bhattacharya, who was scheduled to partake in the event, could not be in attendance over health concerns but penned a heartfelt letter for the supporters.

According to the source, TMC to hold a public meeting on the same ground on 25th March.

From hosting public reception for Soviet leaders Nikita Khrushchev and Nikolai Bulganin to holding mammoth political rallies — many of them on anti-central government planks, the sprawling Brigade Parade Ground in the heart of the metropolis is steeped in history.

A day before it welcomes stalwarts from a wide spectrum of political parties, the 18th-century colonial era venue looks majestic as labourers and volunteers work at a frantic pace to give the final shape to the giant stages and other makeshift facilities.

The mega rally, convened by West Bengal Chief Minister Mamata Banerjee for showcasing a united stand against the centre’s ruling BJP in the coming general elections are being billed as the biggest in the venue both in terms of the prospective huge crowd and a large gathering of parties and leaders from across the country.

However, a time travel to the past brings out the rich history of the ground, located in the backdrop of the iconic Victoria Memorial and the Indian Museum, and under the control of the Indian Army whose, Eastern Command headquarters Fort William lies in the vicinity.

Developed as a parade ground of the forces at Fort William in the second half of the 18th century by the British after their victory in the battle of Plassey, the wide grassy stretch is part of the Maidan (or open field), considered the lungs of the metropolis.

The ground perhaps hosted one of its first political meetings in 1919, when Chittaranjan Das and other nationalist leaders railed against the Rowlatt Act before the Ochterlony Monument (now called Shaheed Minar).

After the country gained independence, the vast space has been used by government agencies, various political parties and other organisations to hold events involving huge turnouts.

A landmark meeting was the one on November 29, 1955, when the Soviet premier Nikolay Aleksandrovich Bulganin and First Secretary of the Communist Party of the Soviet Union Khrushchev received a tumultuous adulation from a sea of humanity as they were felicitated by then Indian Prime Minister Jawaharlal Nehru in the presence of West Bengal Chief Minister Bidhan Chandra Roy and leader of the undivided Communist Party Ajay Ghosh.

On February 6, 1972, a million people cheered wildly as the Prime Minister of newly liberated Bangladesh Sheikh Mujibur Rahman and his Indian counterpart Indira Gandhi held a joint meeting on this parade ground. Those were the days when passions ran high in West Bengal where people had felt one with the freedom struggle in erstwhile East Pakistan.

In an emotion-choked speech, “Bongobondhu” Mujibur Rehman had raised the slogan “Jai Bharat, Jai Bangla” and expressed his gratitude for the blood, toil and sweat given by the Indian soldiers to make his country free.

Then came the 1970s, the emergency in the country, followed by the defeat of the Congress in 1977 both at the Centre and in West Bengal where the Communist Party of India-Marxist-led Left Front took over the reins of power.

Even as the Congress came back to power at the Centre in 1980, the Left front went from strength to strength in the eastern state and their rule continued uninterrupted till 2011.

Two vital ingredients in the Left Front’s political line then were anti-Congress and a vigorous campaign against the “stepmotherly attitude of the Centre“.

As part of its anti-Centre and anti-Congress planks, it played a prominent role in organising opposition conclaves and conference of non-Congress (I) parties and chief ministers.

Also Read: Do you know why this lady was allegedly beaten by TMC goons?

One such conclave was held in Kolkata in January 1984, which culminated in a rally at the Brigade Parade ground. The Speakers included stalwarts like Jyoti Basu, N.T. Rama Rao, Ramakrishna Hegde, Farookh Abdullah, Chandra Shekhar and E.M.S. Namboodiripad.

Four and a half years later, the Shaheed Minar was witness to another gathering of opposition leaders after V.P. Singh resigned from Rajiv Gandhi’s Congress government on the issue of corruption, alleging kickbacks in the Bofors gun deal, and won a famous bye-election from Allahabad as a Jan Morcha candidate.

The meeting at Shaheed Minar, convened by the state unit of the Jan Morcha to celebrate the Allahabad bypoll win, brought together opposition leaders of all shades — Atal Bihari Vajpayee, George Fernandes, Madhu Dandavate, V.P. Singh, Jyoti Basu, and other Left leaders.

The abiding image of the rally was of Basu and BJP stalwart Vajpayee along with other leaders holding each other’s raised hands in a spirit of camaraderie.

However, the image has been referred to again and again by the CPI-M’s opponents through the decades to mock the communists’ anti-BJP stance.

Mamata Banerjee, who rose fast in the state’s political arena through the mid-1980s and the 1990s during her days in the Congress was the chief organiser’ of a Youth Congress rally on November 25, 1992.

She had then rung a huge symbolic bell called CPI-M-er Mrityu ghanta (CPI-M’s death knell), in a bid to give some message to the people “to inspire them to fight against the CPI-M“.