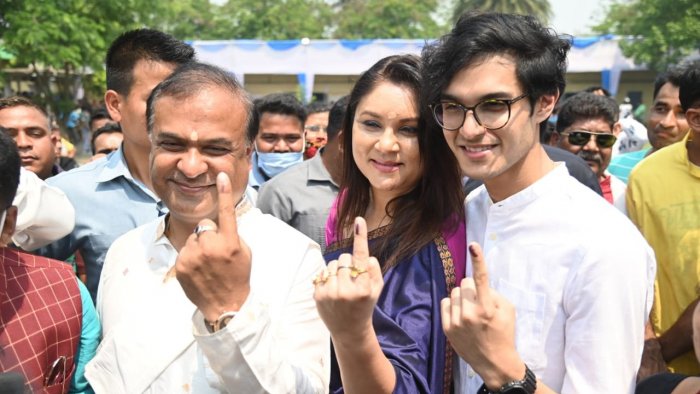 Assam, April 6: Senior BJP leader and Assam finance minister Dr Himanta Biswa Sarma cast his vote at a polling booth in the Amingaon area under the Jalukbari constituency. Sarma was seen in traditional Assamese attire while casting his vote.

Sarma who has been winning the Jalukbari seat since 2001 is seeking re-election for the sixth time.

A turnout of 33.18 per cent was recorded in Assam till 12 pm as voting is underway for the third and final phase of the Assembly Elections with ballots being cast in 40 out of Assam’s 126 constituencies.

Voting began across 475 seats in West Bengal, Assam, Tamil Nadu, Kerala, and Puducherry today, at 7 am.

While Bengal and Tamil Nadu have been witnessing high-octane political battles, Assam is ready to wrap up the last phase of polls.

Kerala has been a host to marathon rallies and mammoth roadshows, while the Puducherry poll campaign was marred by controversies such as allegations of Aadhaar data usage by the Bharatiya Janata Party (BJP) and no ticket to former CM V Narayanaswamy by the Congress.