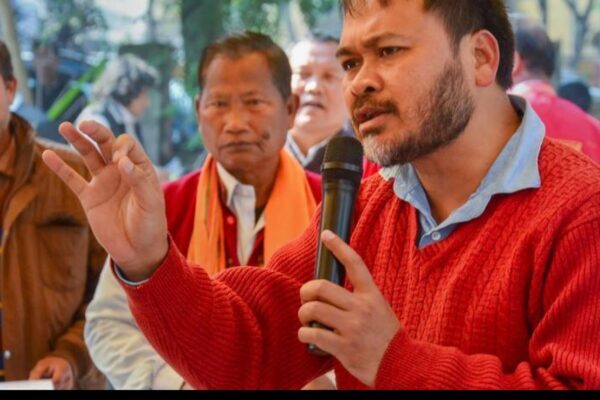 Assam, March 5: Jailed Assam activist Akhil Gogoi, who has been in prison for over a year after his arrest in a case related to the violence during the anti-citizenship law protests in the state, has written a letter urging opposition leaders to project a united chief ministerial candidate to defeat the ruling BJP-led alliance in the upcoming Assam assembly election.

Raijor Dal, a regional party launched by his supporters, has released the letter in which Gogoi has stated that if need be, he would “refrain from contesting“. The party has formed an alliance with another regional party called Assam Jatiya Parishad (AJP) which was formed out of the anti-CAA protests by former members of the All Assam Students’ Union (AASU) and other civil society groups.

In the letter, the anti-CAA activist has urged the opposition parties to field common candidates against the BJP. Gogoi said the purpose is to defeat the BJP which he termed as a “communal and fascist party“.

The election in Assam will be held on three separate days in March and April. The state has 126 seats in the legislative assembly.

The “open letter” addressed to the “leaderships of the opposition political parties of Assam” is in Assamese and is unsigned (only the upper portion of the letter seems to have made its way into social media). Gogoi also accused the Congress of giving a fresh lease of life to Badruddin Ajmal’s All India United Democratic Front (AIUDF), which he termed as “bad news for Assam’s society“.

“The AIUDF is actually strengthening the BJP. Even the minority community was bidding adieu to the AIUDF. But, Congress has given the party a fresh lease of life. The presence of AIUDF with the Congress is the only reason that the regional parties are not aligning with the Congress,” he said.