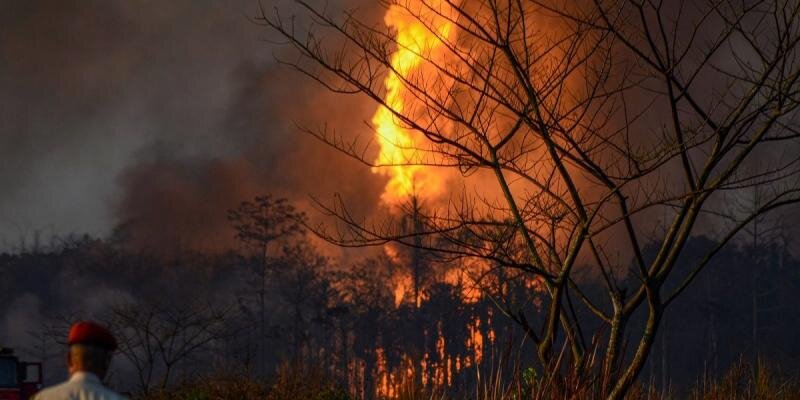 Guwahati, June 15: The fire at the natural gas well of Oil India Limited (OIL) at Baghjan oil field in Assam Tinsukia district is still raging on and both centre and state government are taking help from the experts of different foreign countries to douse the fire.

Two firefighters were killed and four others injured in the fire incident.

At least 50 houses, properties, tea garden, grasslands, many trees damaged, several domestic animals were killed in the massive fire incident in the area.

The incident had forced over 10,000 people living in surrounding areas of the site to leave their homes and the people had taken shelter at 12 relief camps.

Union Petroleum Minister Dharmendra Pradhan said that – “Our priority is now to seal the gas well as soon as earliest.”

“Both centre and state governments are jointly working on this. We have brought global experts to seal the gas well. The Government of India has constituted a high-level inquiry committee to find out the actual reason of the incident. The Assam government has also initiated a probe. We will give compensation to the people after completing the assessment of the damages. We have already provided Rs 30,000 to each family as an interim compensation,” Dharmendra Pradhan said.

Union Minister Pradhan further said that his ministry is taking all possible short and long term measures, including giving compensation to the people and restoring the sanctity of the ecological factors given the fire.

He also said that though the oil sector plays important role in the economy of the state, the oil industry is also greatly indebted to the people of Assam for the support they extend to the government and industry in this crisis.

The both centre and state governments are now taking international help to douse the fire, and constituting an expert committee to study the environmental impact and suggest the remedial steps.

Assam Chief Minister Sonowal said that the Union Petroleum Minister according to highest importance to the Baghjan fire incident is taking steps to bring in experts from America, Australia, Canada and Singapore to douse the fire.

On the other hand, the Assam Chief Minister said that the government is attaching due importance to the phenomena and is all set to constitute a committee taking experts from IIT Guwahati, Regional Research Centre, Jorhat, Geological Survey of India and after receiving the feedback from the expert committee, the government would take appropriate, time-bound steps.

“The Maguri Beel has been polluted following the gas well blowout and we directed the Oil India Limited to clean the Beel (wetland). We are planning to convert Maguri-Motapung Beel into an international tourist destination,” Sarbananda Sonowal said.

Sonowal also said that the government will take all steps for all-round development of Baghjan and all pragmatic steps will be taken to avert recurrence of such incidents in the future.

On the other hand, the Oil India Limited said that Environmental Impact Assessment in the vicinity of the area through a NABET accredited firm is in progress.

“Commissioning of the pumps is in progress. Filling of water in the first CMT water reservoir (3000KL) from Dangori River progress: 80%. Digging/extension job of the second CMT water reservoir (Capacity 12000 KL) near kill pump area to accommodate more volume of water is in progress. Civil work for development of debris laydown area and Bunkhouse placement area is in progress. Additional one number of water pump has been mobilized for water pump station created at Dangori river bank. Joint inspection of equipment mobilised from ONGC- Sibsagar by one team from M/s Alert and ONGC CMT team is underway at OIL CMT Yard in Duliajan. Vehicle carrying equipment from ONGC-Rajahmundry is approaching Siliguri as per latest report. Loading of additional equipment being mobilized from ONGC—Rajamundry is underway,” said in the OIL release.

The Oil India Limited also stated in the release that, due to agitation programs, there was production loss of 509 MT of Crude Oil from 28 numbers of oil wells and 0.65 MMSCM of Natural Gas from 4 numbers of gas wells and 26 numbers of associated gas wells as reported on June 13.