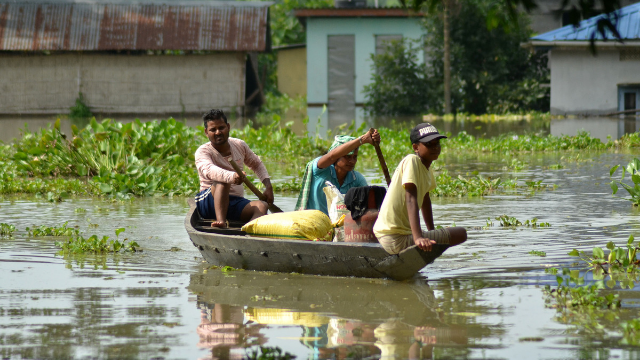 Assam Chief Minister, Sarvanand Sonowal’s home village panchayat, the Bhindakata panchayat has faced massive destruction due to the severe floods in the state for the 3rd time in a row.

As the floods alongside landslides have been continuing in the state for several months, thousands of people have been shifted to relief camps and compelled to stay there.

Relief camps have been set up for flood victims in multiple areas like the Vishnu Prasad Rabha Sports Project located in Bindhakata.

The mighty Brahmaputra has engulfed at least a hundred houses and farms in the Bindhakata village panchayat, rendering hundreds homeless and unemployed.

School buildings and houses which had survived the last flood, have all destroyed with the outbreak of the recent floods destroying even the faint hope that was alive in the minds and hearts of the people.

As the floods began, locals had initially taken shelter in the forest behind the native house of Chief  Minister Sonowal, with whatever nominal belongings they could rescue. However, the flood levels increased, they were forced to flee the forest area too!

Assam is prone to frequent floods and other natural calamities like earthquakes and landslides along with other North-eastern states each year, mainly due to riverbank erosion.

Erosion leads to breakage in embankments and rise in levels of the Brahmaputra and its 50 tributaries which causes massive, devastating floods each year during the monsoon. Floods are further aggravated due to flash floods from the neighbouring states of Arunachal Pradesh and Meghalaya.

These floods severely damage the state economy and rural and urban development.