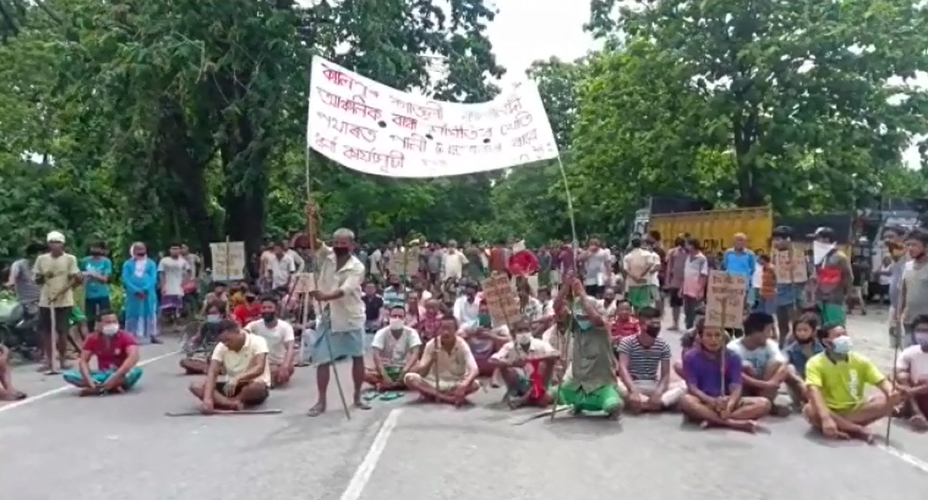 Guwahati, June 22: At a time when many people are facing hardships due to flood situation in several districts of Assam, thousands of farmers protest in Baksa district along Indo-Bhutan border are now struggling to collect water for cultivation in their paddy fields.

Thousands of farmers of around 25 villages under Tamulpur sub-division along Indo-Bhutan border are doing paddy rice cultivation by using water from Bhutan side.

The farmers have diverted the water through the Jamfwi aka dongs (irrigation channels) to their paddy fields and this process is being continued in the past several decades.

But due to the novel Coronavirus (COVID-19) lockdown, the Bhutan government has closed all entries of outsiders to the country and the Indian farmers have also been not allowed to make irrigation channels originated in Bhutan side.

Without water from the irrigation channels, the farmers downstream cannot irrigate their crops.

The farmers of Baksa district are now facing many problems for cultivating paddy rice this year following the Bhutanese government decision.

By demanding to resolve the problem, hundreds of farmers of 25 villages in Tamulpur sub-division, on Monday staged protests and blockaded Rongia-Bhutan connecting road for several hours.

The farmers demanded the Assam government to take the issue seriously and resolve it soon.

A protester farmer said that, without water, they will face more problems.

“We had brought water to our paddy fields by making dong bandh in Bhutan side. Due to lockdown, the Bhutanese government has barred us to enter there. We are now facing a water crisis for cultivating paddy rice. The government should have to resolve the problem soon. We will intensify our protests if our demand is not fulfilled,” the farmer said.