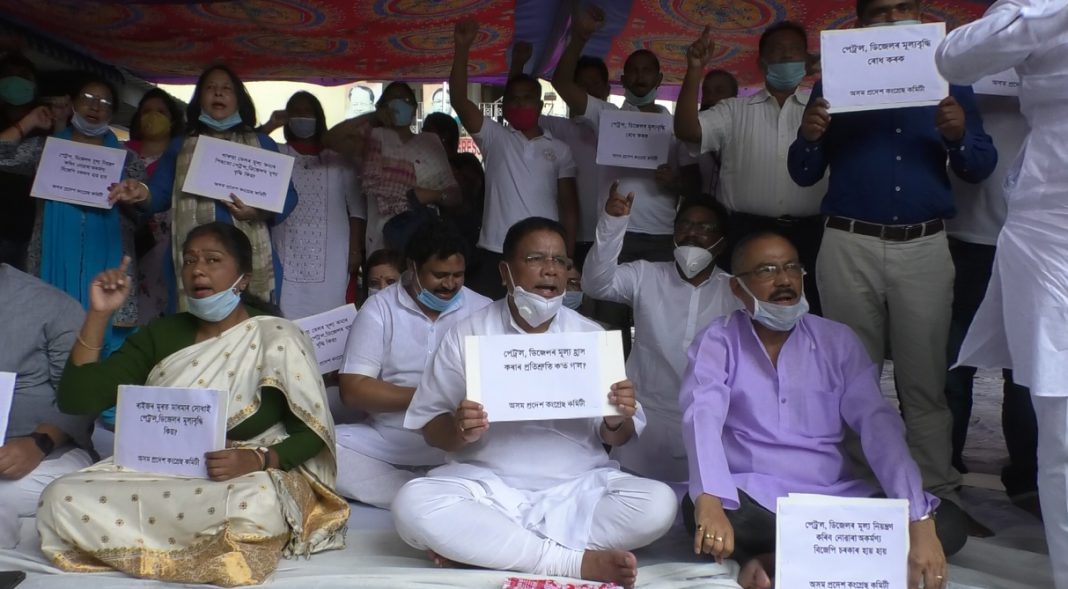 Guwahati, June 24: Assam Congress party on Wednesday staged a protest in Guwahati against the sharp hike in petrol and diesel prices.

The Assam Pradesh Congress Committee (APCC) led by former Assam Chief Minister Tarun Gogoi and APCC president Ripun Bora had staged a protest against the price hike in petrol and diesel and shouted slogans against the BJP-led both centre and state government.

Hundreds of Congress party leaders, workers took part in the protest rally held in front of Rajiv Bhawan in Guwahati.

On Wednesday, the price of petrol was at Rs 84.24 per litre in Guwahati while diesel was retailing at Rs 78.82.

Hitting out at the Modi-government, former Assam Chief Minister and senior Congress leader Tarun Gogoi said that, today the whole country is passing through a most difficult period and the common men facing hardships due to the wrong policies taken by Prime Minister Narendra Modi and his government.

“By imposing a tax on petrol and diesel it has caused lots of hardship to the common people. Crore of crore people of India have lost their jobs, losing their livelihood. Hardship of the common men has been on the rise. Instead of giving relief to the common people, the government has increased the prices of petrol and diesel while the crude oil prices in the world market on the lowest side today,” Tarun Gogoi said.

“The Modi-government has increased the excise duties on petrol and diesel. The government is bankrupt. We want the government should provide relief to the common men, poor people,” Gogoi said.