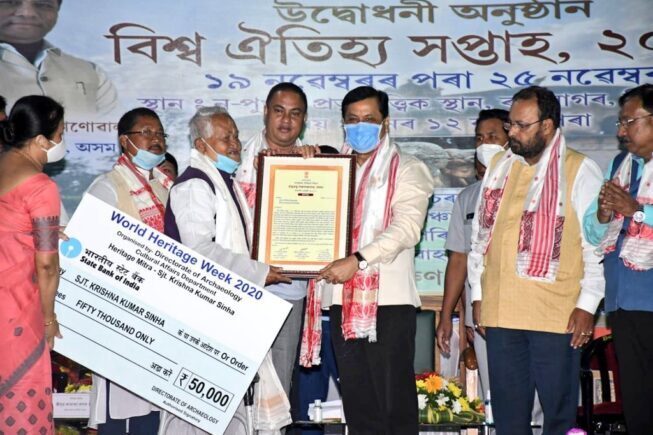 Assam, 20th November: On the occasion of “World Heritage Week” Assam CM, Sarbananda Sonowal called upon the people of the state to preserve historical monuments and antiquities.

They are the symbols of the art, culture, and people of a state, he said. The state government has taken several steps for the preservation of its historical monuments, he added.

Cultural heritage is said to be the mirror of the society.

At the #WorldHeritageWeek 2020 celebrations in Sivasagar today, felicitated several noteworthy personalities for their untiring efforts in preserving the rich heritage of the state. I lauded them for their noble works. pic.twitter.com/6Z0eSToF4r

The central government has identified Sivasagar as one of the five iconic sites in the country.

“Built by our forefathers, our government is committed to promoting the state and the rare monuments before the world community,” Sonowal wrote in the tweet.

State minister for archaeological matter, Keshab Mahanta said the center has sanctioned Rs. 3500 crore for the protection, preservation, and beautification of the cultural heritage of Sivasagar.

The state directorate of archaeology has also adopted measures to preserve the lineage of the 42 Ahom kings as well as other monuments scattered across the state.

CM Sarbananda Sonowal also directed the district administrations and public representatives to take proactive steps for acquainting the young generation with their rich cultural heritage in their respective districts.

Meanwhile, a world-class museum will be built in Sivasagar. The state government has also undertaken a beautification project for the Charaideo’s Maidam for its proposed inclusion into UNESCO’s world heritage site. The project is worth rupees 25 crores.

The chief minister also felicitated a few persons for their commendable work and contributing to preserving and promoting the historical monuments of the state. He also released handbooks on archaeology on the occasion.