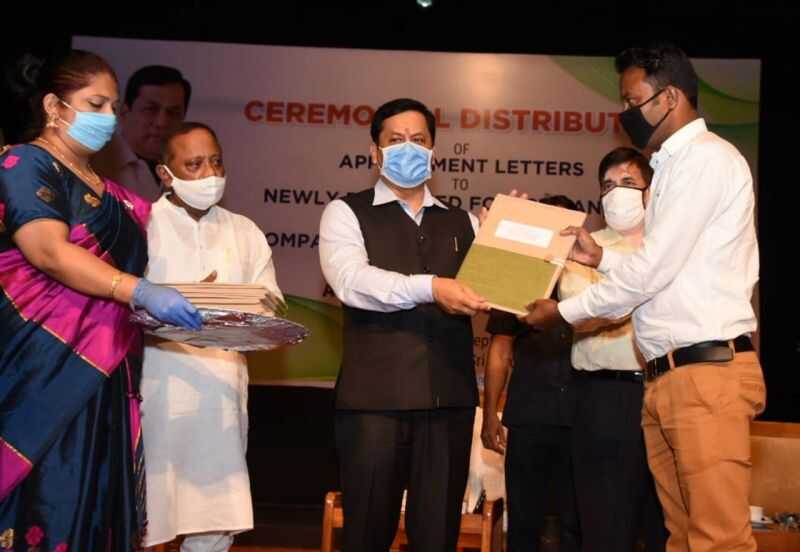 Guwahati, September 26: Assam Chief Minister Sarbananda Sonowal on Saturday distributed appointment letters to the newly recruited forest rangers and appointees on compassionate ground in the state Environment and Forest department in a programme held at Srimanta Sankardeva Kalakshetra in Guwahati.

Speaking on the occasion, Sonowal said that the present State government since the time of assuming office has unleashed an uncompromising and relentless fight against corruption.

The government adopted zero tolerance attitude against corruption and carried out massive anti-corruption drives, the Chief Minister said adding that many government officials were arrested and put behind bars on corruption charges in the last four years.

He said that corruption was prevalent in Assam from earlier times and the present government through its anti-corruption campaign tried to weed out this menace from society.

“As a result of government’s anti-corruption drives, people’s confidence in the administrative machinery has increased significantly,” Sonowal said.

The Assam Chief Minister said that the government in the most transparent manner conducted recruitment processes and appointed youths purely on merit and competence.

Sonowal also urged people to stay away from all forms of corrupt practices and help the government in the anti-corruption campaign.

Further, referring to the recent incident of leak of question paper of recruitment examination for Sub-Inspector in Assam Police, the Assam Chief Minister assured that all culprits would be brought to book. He said that investigation to unearth the nexus that conspired to spoil the recruitment process is on and those who were involved would not be allowed to go unpunished.

Moreover, congratulating the new recruitees, Sonowal urged them to work for identifying the true potential and possibilities of the State. He also urged them to work with sincerely to increase forest cover in the State and generate awareness among people living in the border areas of the forest reserves and sanctuaries besides preserving biodiversity.

Sonowal further said that as a result of state government’s committed efforts, forest cover in the State increased by 222 sq. km as stated in the latest report of Forest Survey of India. He also informed that the government in its bid to make Assam a pollution-free State planted 8 crore horticultural and medicinal plants in last four years.

While PCCF AM Singh delivered the welcome speech, the programme was also attended by several senior officers of the department among others.