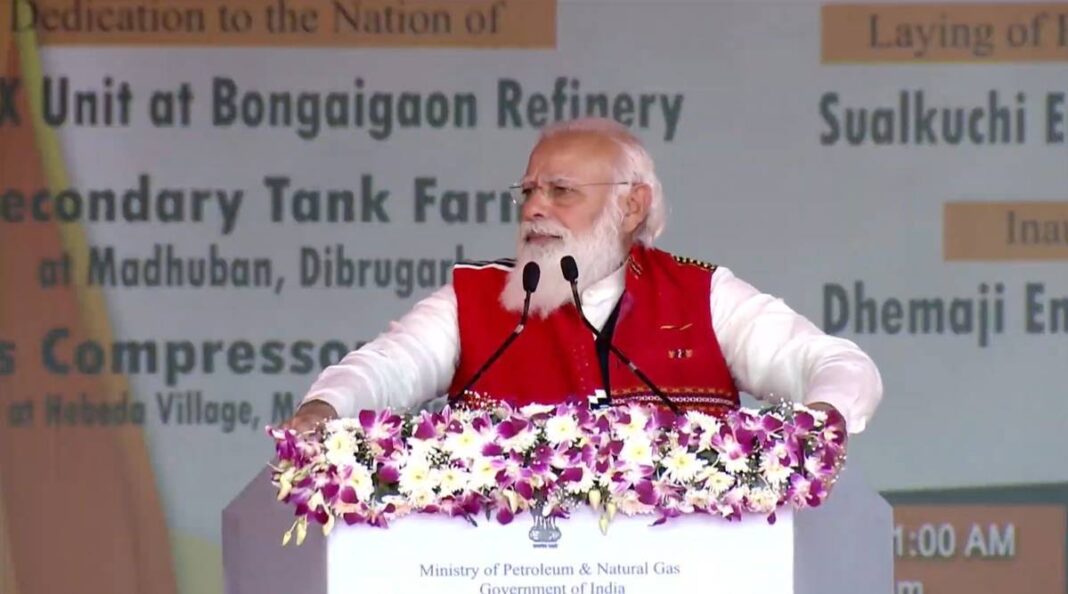 Assam, Feb 22: Prime Minister Narendra Modi on Monday indicated that the dates for the assembly election in Assam, West Bengal, Tamil Nadu, Kerala and Puducherry could be announced in the first week of next month.

“I know you all are waiting for the election. Since the dates for the last assembly election in Assam and other states was announced on March 4 (in 2016), it seems the Election Commission (EC) will announce the polls anytime in the first week of March,” he said at a public meeting in Assam’s Dhemaji.

“My effort will be to visit Assam, West Bengal, Kerala, Tamil Nadu and Puducherry as many times as possible before the schedule is announced by EC. We can assume that the announcement could be made on March 7,” he added.

In his third visit to the poll-bound state within a month, Modi launched several oil and gas projects, inaugurated an engineering college and laid the foundation stone of another.

Despite immense potential, previous governments treated the North Bank of Brahmaputra (in Assam) in a step-motherly manner. Connectivity, hospitals, educational institutions or industry was not a concern of these earlier governments,” said Modi in a public meeting at Silapathar.

“Such bias was removed with coming of the Bharatiya Janata party (BJP) government led by Sarbananda Sonowal. Work on the Bogibeel bridge on Brahmaputra was speeded up and broad-gauge railway lines reached this area after our government came to power. Work on the second bridge at Kalia-Bhomora over Brahmaputra is going on at a fast pace,” he added.

The PM dedicated the INDMAX unit at Indian Oil Corporation’s (IOC) Bongaigaon refinery to the nation. INDMAX is an indigenously developed technology by IOC to produce a high yield of LPG and high-octane gasoline from various petroleum fractions.

“The projects will speed up the pace of development of Assam and also increase employment avenues in the state. Out governments are trying to reach the areas and people who have been neglected earlier,” said Modi.

“Our governments at the Centre and Assam have done more for the development of the state in the past few years than what previous governments did for decades,” he added, while urging those present to strengthen the “double-engine” (BJP governments at Centre and state) of growth further.

On January 23, Modi had addressed a rally in Sivasagar and distributed land allotment certificates to 106,000 landless families. On February 7, he had addressed another rally at Dhekiajuli, laid the foundation stones of two medical colleges and launched the Asom Mala road network project.

They included the Mahabahu-Brahmaputra project to improve inland water transport connectivity, laying the foundation stone of a 19km bridge connecting Dhubri in Assam to Phulbari in Meghalaya and the ground-breaking ceremony (bhumi pujan) of another bridge connecting Jorhat and Majuli island.