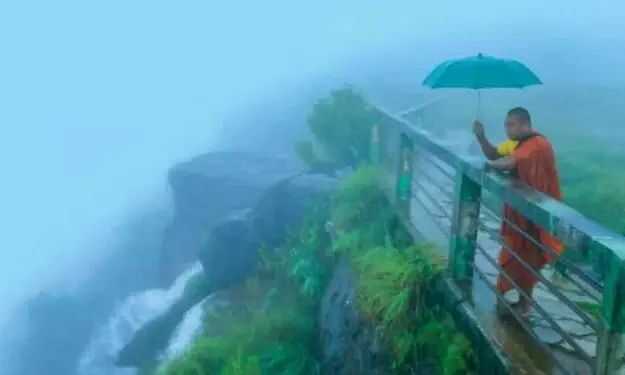 Northeast, Feb 23: A western disturbance is set to affect the weather over the Western Himalayan region of Sikkim and other places by bringing widespread snow rainfall, along with local thunderstorms and hail for the next few days.

Furthermore, isolated thunderstorms and lightning are very likely over Jammu, Kashmir, Ladakh, Gilgit, Baltistan, Muzaffarabad, Himachal Pradesh and Uttarakhand during the next five days. Isolated hailstorms are also expected over Jammu, Kashmir, Ladakh, Gilgit, Baltistan and Muzaffarabad on 24th and 25th; Himachal Pradesh during 25th-27th, and over Uttarakhand during 23rd-27th February.

Lastly, isolated heavy rainfall/snowfall have been predicted over Jammu, Kashmir, Ladakh, Gilgit, Baltistan, and Muzaffarabad on 25th, 26th, and 27th February, and over Himachal Pradesh on 26th and 27th February.

TWC met team forecasts that the heaviest snowfall will occur on Friday, with snow totals in excess of 80 cm/day likely over the western part of Jammu & Kashmir.

Also, intermittently isolated snow rainfall is expected over the Himalayan region of Sikkim for the next few days as well.

Meanwhile, a feeble cyclonic circulation located over Northern Kerala is expected to bring spells of rain in some areas of Tamil Nadu and Kerala on Tuesday.

Warmer temperature trends have been forecast for much of India until early March at least. Temperatures exceeding 40°C are possible in some pockets of Konkan and Goa from Saturday onwards.

Dense fog is likely in some plain areas of North India on Tuesday and Wednesday in the morning period.