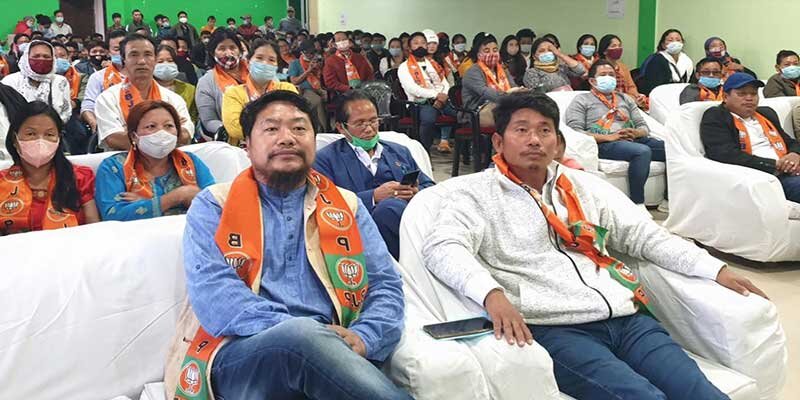 Janata Dal-United leaders (JDU) joined BJP ahead of Municipal council elections in Arunachal in hope of getting ruling party tickets from their respective wards.

Panchayat and municipal elections scheduled held simultaneously in Arunachal Pradesh on December 22 after a delay of over two years. Many opposition leaders join the ruling BJP party for tickets to contest elections.

The main IMC Councilor who joined the saffron brigade is former Deputy Chief Councilor Tarh Nachung, former councilors Tatung Tania, Taba Takia, and aspirants which include Hari Yaying, Rido Ania Rechi, and dozens of supporters from various parts of the capital complex in presence of several top BJP leaders of the state.

Welcoming members, Capital district BJP president Tarh Soping said that they had left the party due to certain reasons and it is their homecoming.  He urges upon all the party workers and leaders not to compare as new and old.

Nachung while addressing the gathering informed that “I have been in the capital more than thirty-five years and has been associated with the organization and worked several social welfare activities. I was Deputy Chief Councilor and was in JDU earlier and today joined the BJP. I have been witnessing the activities of the present leadership of BJP and its government lead by Pema Khandu and his leadership is liked by me which made me join the saffron brigade”.

Among 60 MLAs of Arunachal, JDU has 7 MLAs and it was expected that many MLAs are also planning to join BJP hoping to get panchayat tickets for their own supporters.

BJP’s state president Biyuram Wahge appealed to party leaders to work with sincerity. “Good work will always be remembered forever. The leaders should always respect grass root workers and the workers should always be told the truth,” said Wahge.