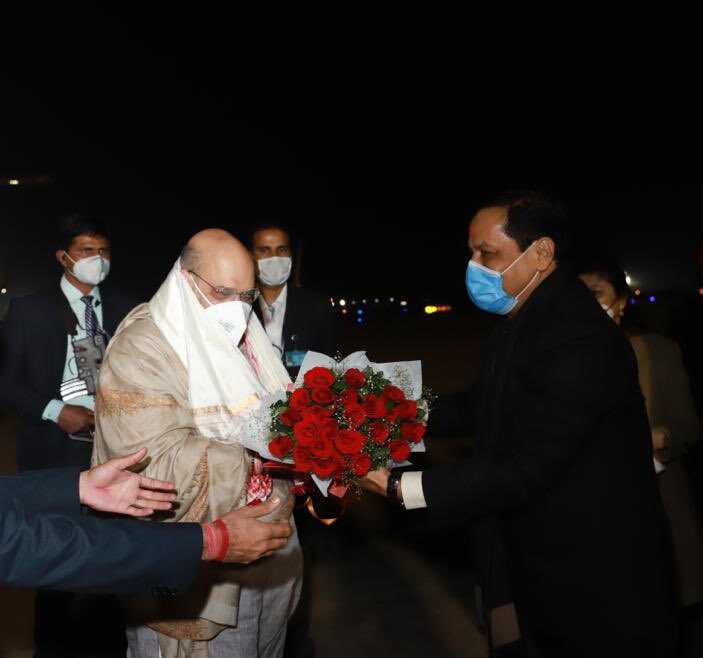 Guwahati, Dec 26: Union home minister Amit Shah reached Guwahati airport on a three-day visit to the Northeast. He was accorded a warm welcome after he landed at LGBI Airport in Guwahati of Assam.

“I heartily welcomed Hon’ble Union Home Minister Shri @AmitShah Ji at  Guwahati airport and thanked him on behalf of the people of Assam as he is set to launch several developmental projects for the state,” chief minister Sonowal tweeted.

Amit Shah has planned to lay foundation stones of a number of ambitious projects from Amingaon on Saturday, including one for the development of the Batadrava Than at Bardowa also lay the foundation of a new medical college in Guwahati being built as the country’s biggest medical college and hospital.

Further, the Home Minister will also lay the foundation stones of nine law colleges located at different places in the State.

On December 27, Shah will visit the revered Kamakhya Temple and subsequently fly to Imphal.

In Imphal, he will lay the foundation stones of the Churachandpur Medical College and Hospital, the State Government Guest House at Imphal, the Manipur Bhawan at Dwarka in New Delhi, the IIT at Muongkhong and the Manipur Police headquarters at Imphal.