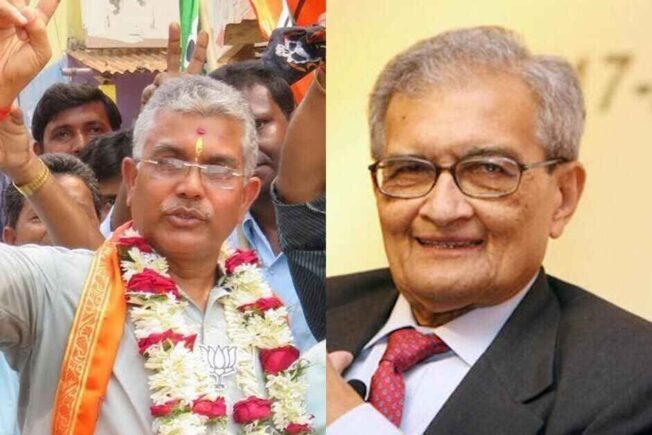 “I don’t want to comment anything on his (Amartya Sen) personal life. He has been married 3 times in 3 different religions. He has no moral right to comment on such things. He has eloped from this country, he does not care about the people of this country. When the public was in trouble he was not with them, be it during Amphan or this pandemic. We not here to listen to him, whoever has, drowned,” said Dilip Ghosh.

This came after a day when Amartya Sen has written a letter referring to West Bengal Chief Minister Mamata Banerjee and thanked her for supporting people like him who are under attack.

“I do not know who is standing by whom. Due to political compulsion, they are trying to survive with each other. This would not happen anymore. Those who fooled the citizens of West Bengal provided them fictitious information and did not contribute a single penny are not getting revealed. They are in deep worry now and thus are coming up with other issues just to save themselves,” Ghosh added.

In a short email, Sen wrote, “I am very happy indeed to get your supportive letter. I am not only most touched, but also very reassured that despite the busy life you have to lead, you can find time for reassuring people under attack. Your strong voice, along with your full understanding of what is going on, is, for me, a tremendous source of strength.”

On Friday, Chief Minister Mamata Banerjee wrote a letter to Sen and slammed the BJP for “leveling baseless allegations” against him. “We all salute Amartya Sen. Just because he isn’t inclined towards BJP’s ideology, they are leveling such allegations against him,” she had said.

“I say that you have given accounts on what have you given in response to all that the people of Bengal has given to you? We have the right to ask for that account which they are not being able to provide,” Ghosh further added.

Earlier this week, Visva-Bharati University Vice-Chancellor Bidyut Chakrabarty in a letter to the state government had named Sen among those who have “illegally occupied plots on the campus” – a charge denied by the Nobel laureate who has said that the land in question was registered in records on a long-term lease.