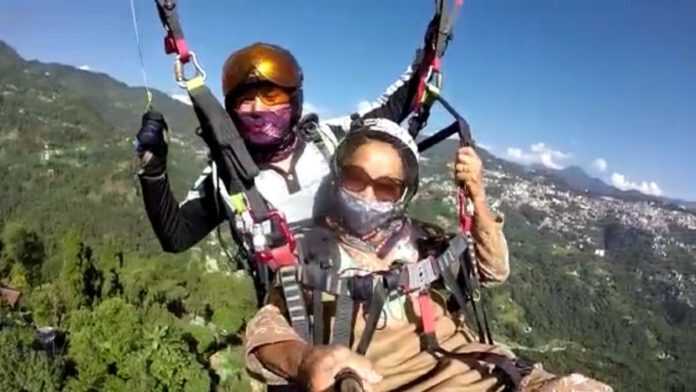 Sikkim, 2nd November: Dukmit Lepcha(82) has become the oldest woman in Sikkim to do a tandem paragliding. She is a housewife and has no prior health issues. She took the ride from a monastery, Aangi Gumba, taking off from a point in Ranka. She flew with an instructor Nima Tamang on 28th of October, 2020 and her family cheered along. She flew with Sikkim Paragliding counter, which is a professional paraglider service provider.

Lepcha said, “I just wanted to fly once, now I have fulfilled my dream and I am happy.” This is not the first time that she took to any adventurous sport. Five years ago, she also experienced scuba diving in Andaman and Nicobar Islands.

“When I tried Scuba diving, my partner was not able to dive but I was not afraid at all and this time in paragliding in Sikkim also I was not afraid and fearful for a second,” she said. She said that flying was comfortable and she enjoyed it.

The ride lasted in the air for nearly six minutes. She said, “I wanted to fly for more time but due to technical reasons, we had to land.” Pilot Nima Tamang said, “I was not aware that she is that old but later I came to know she is 82 years old. During the entire flight, there was no complaint from her side. She flew very normally like any other individual. Overall the flight was good. She wanted to fly for more time but I had already directed my glides towards the low atmosphere do could not take her to the higher atmosphere again.”