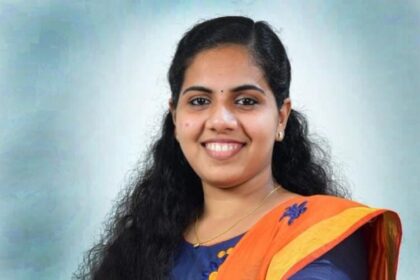 Kerala, Dec 25: Kerala is all set to get a 21-year-old BSc student of Mathematics, Arya Rajendran as the mayor of its capital city Thiruvananthapuram.

Initially, she thought it was a prank played by some of her college friends but a call from the Communist Party of India’s (CPI–M) district secretariat made things clear for the second year B.Sc Mathematics student of the All Saints College– Arya Rajendran (21).

The party has entrusted her with a coveted post. She will be the new Mayor of Thiruvananthapuram Corporation. The state capital has pulled off a mayoral first– she is the youngest Mayor of the country.

“I was into politics at a young age. If the party asks me to take up any role, I will be the happiest to accept it,” said Arya Rajendran, daughter of an electrician K Rajendran and LIC agent Sreelatha Rajendran.

Hailing from a lower-middle-class family, she doesn’t have a motorable road. Basking in the glory of recent local body elections, in which it won the majority of corporations, panchayats, and block bodies, the ruling party sprang a surprise by giving the mantle of the prestigious corporation to a first-time councillor.

Senior party leader Jameela Sreedharan and two others were also in the running, but the party chose a young leader over them.

Call it an election stunt or not, this time the party had experimented with many young faces like Rajendran to take on the might of the Bharatiya Janata Party and incumbency factor and many emerged victoriously.

In the 100-member corporation council, the ruling Left Democratic Front has 52 seats and the BJP is in opposition with 35 seats.

In the council also she is the baby (usually the mayor is called the mother of the city) but politics is nothing new to Arya Rajendran. She became a member of Bala Sangam, a children’s outfit affiliated to the party, at the tender age of six. Now she is its state president and also an office-bearer of the Students Federation of India, the party’s youth wing.

The mayor-designate has quite a few priorities. “A heritage city Thiruvananthapuram is already beautiful. I will make it more clean ensuring proper waste disposal. I will also ensure medical care for all,” she said adding many leaders who have inspired her, and prominent among them were Chief Minister Pinarayi Vijayan and Health Minister K K Shailaja.

She said along with her new role she would like to continue her studies. “People in my ward gave me a thumping margin because I was young and a student. I will pursue my studies along with my public service,” she said. Her elder brother works in a West Asian country.