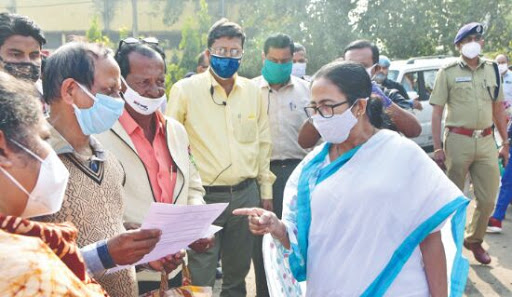 Bengal, Jan 10: West Bengal Chief Minister Mamata Banerjee announced that till Saturday afternoon, more than 2 core people in the state have received doorstep delivery of government services through the flagship program ‘Duare Sarkar’ that has reached its third phase.

The Chief Minister tweeted the detailed statistics of how many people got benefits from the project.

Happy to share that as of 4pm today, the total number of visitors in #DuareSarkar camps has crossed 2 Crores!

I once again congratulate & thank every single GoWB official for ensuring smooth door-step delivery of Govt services & benefits. Thanking all participants too! (1/3)

State Government had rolled out the program of ‘Duare Sarkar’ on December 1, 2020. It was scheduled to run for two months until January 31. From Kanyashree, Sabujshree, Krishakbandhu to Swasthyasathi, Joy Jahar – Consumers are getting services almost immediately after applying to these camps.

In a very small period, the program witnessed the face of success. Previously, Banerjee had announced the success of the program when it reached over a crore of people in just two weeks. She had thanked and congratulated all the officials who made this possible. This time the state government climbed the ladder a bit more.

The Chief Minister tweeted that in just 29 days, the number of beneficiaries in the ‘Duare Sarkar‘ camp has reached 2 crores.

A detailed chart has been posted on Twitter the handler of the TMC-led government– Egiye Bangla.

Not only the chart but a video has also been shared by the same Twitter handle.

All India Trinamool Congress took the tweeter and shared the news, “#DuareSarkar has served 2 Cr+ people till now. It is wonderful to see @MamataOfficial’s unique initiative benefit lakhs of people across Bengal. Urging more people to visit the camps to avail the benefits of the schemes that they are eligible for. #2KotirDuareSarkar”

#DuareSarkar has served 2 Cr+ people till now. It is wonderful to see @MamataOfficial's unique initiative benefit lakhs of people across Bengal.

Urging more people to visit the camps to avail the benefits of the schemes that they are eligible for. #2KotirDuareSarkar pic.twitter.com/v7TMAdso2w

The rigorous hard work of around a thousand state government officials and ten thousand supporting staff made this possible.

Bengal education and parliamentary affairs Minister Partha Chatterjee wrote on Twitter, “Overwhelmed to see the great response of people to @MamataOfficial’s unique initiative Duare Sarkar. Our priority has always been to serve the people of Bengal and we want to continue this endeavor in the coming days as well. #2KotirDuareSarkar”

Our first priority has always been to serve the people of Bengal and we want to continue this endeavor in the coming days as well.#2KotirDuareSarkar pic.twitter.com/xWupreVDsk

The four-phased program was rolled out on December 1 and will continue till January 31. The camps in the first phase were scheduled from December 1-11, the second phase from December 15-24, the third is from January 2-12 and the fourth from January 18-30. Altogether 665 camps are presently functional.