Home Assam 15 years rule of Congress in Assam is the epitome of corruption:... 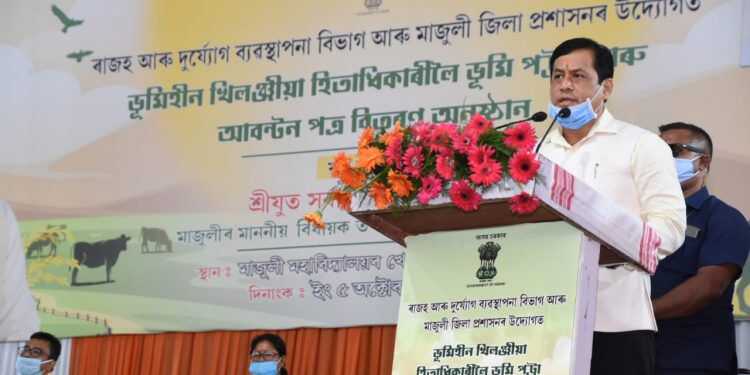 Guwahati, 5th October: Coming down heavily on 15 years of Congress misrule in the state, the Assam Chief Minister termed the predecessor government as the ‘merchants of corruption’ while quipping that Congress had opened shops of brazen corrupt practices by facilitating recruitment scams in every department.

Assam Chief Minister Sarbananda Sonowal on Monday said that, in last four years, his government has given regular and contractual jobs to 80 thousand youths of the state on the basis of merit and in a very transparent manner. No one could cast any aspersion on the recruitment process.

“Of late, efforts were made to tarnish the image of the state government in the Assam Police Sub Inspector (SI) recruitment which was cancelled immediately when anomalies came to notice,” Chief Minister Sarbananda Sonowal said.

“The present state government had to spend a lot of time in cleaning the filth left behind by the previous government and Congress had lost the moral rights to criticize others on corruption,” he said.

Adding that scams in APSC, disbursement of untied fund, land requisition, allotment of bonded warehouses under excise department, fertiliser and seeds of agriculture department etc were the shining examples of Congress’ 15 years misrule in the state, Sonowal remarked that the party did not even hesitate to snatch away the food meant for the poor children as the Congress regime saw scams in children’s food under social welfare department, ration cards in the name of fake beneficiaries, allotment of IAY houses among others.

Sonowal reiterated that the present state government has been following the policy of zero tolerance against corruption from the outset and even secretary-level officer of Indian Civil Service, chief engineer, DCS, DFOs, ADCs, directors, circle officers etc have all been put behind bars for involvement in corruption.

“Scores of meritorious youths have been able to secure government jobs in a transparent manner due to the stringent reforms undertaken in APSC while enabling them to become parts of state’s administrative system,” Sonowal said.

He also remarked that Congress has been trying to cover up its own misdeeds by criticising Assam government’s every action without any basis and said that state’s people would not be misled by such devious designs.

He also reiterated that the present state government remained accountable to only the people of Assam and it would leave no stone unturned to deliver on its promise of clean and honest governance.