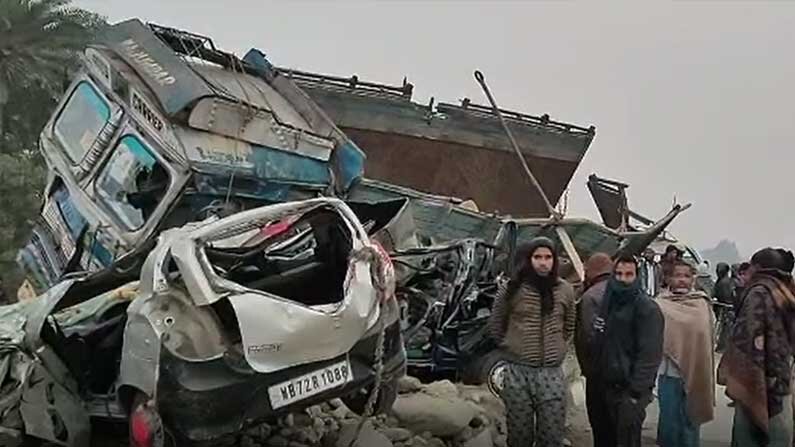 Jalpaiguri, Jan 20: In a tragic incident, 14 people, including four children, lost their lives in an accident in Dhupguri city of Jalpaiguri district in West Bengal. The unfortunate accident happened due to reduced visibility caused due to fog. Around 10 people were injured in the accident and have been admitted to Jalpaiguri Super Speciality Hospital.

The accident occurred in the Jaldhaka area in the Dhupguri block due to a collision between a stone-laden truck and three vehicles. The 14 deceased, including four children, were coming back from a marriage party in the three vehicles.

“A vehicle collided head-on with a boulder loaded truck whose driver lost control of the vehicle and hit the divider and slipped towards its right side. Two other vehicles coming from the wrong side collided into the body of the truck due to which boulders loaded in the vehicle fell on them. Another small lorry in front of the truck was also damaged. In all, four vehicles got damaged,” Sumant Roy, Assistant Superintendent of Police, Jalpaiguri said.

The police officer said that the circle inspector of Dhupguri and his team reached the accident spot within 10 minutes of the incident. Roy said that several cranes were called in to clear the road which was blocked due to the accident.

Prime Minister Narendra Modi expressed grief over the incident and announced to pay Rs 2, 00, 000 compensation for the kin of the deceased and Rs 50,000 for the injured from the Prime Minister’s National Relief Fund (PMNRF).

“The road accident in Dhupguri in Jalpaiguri (West Bengal) is extremely anguishing. In this time of sadness, prayers with the bereaved families. May the injured recover soon,” the PMO said.

West Bengal Chief Minister Mamata Banerjee extended condolences to the bereaved families and prayed for the speedy recovery of the injured. She announced an ex gratia of Rs 2.5 lakh each to the next of kin of those who lost their lives in the incident. She also said that Rs 50,000 each would be given to those injured.