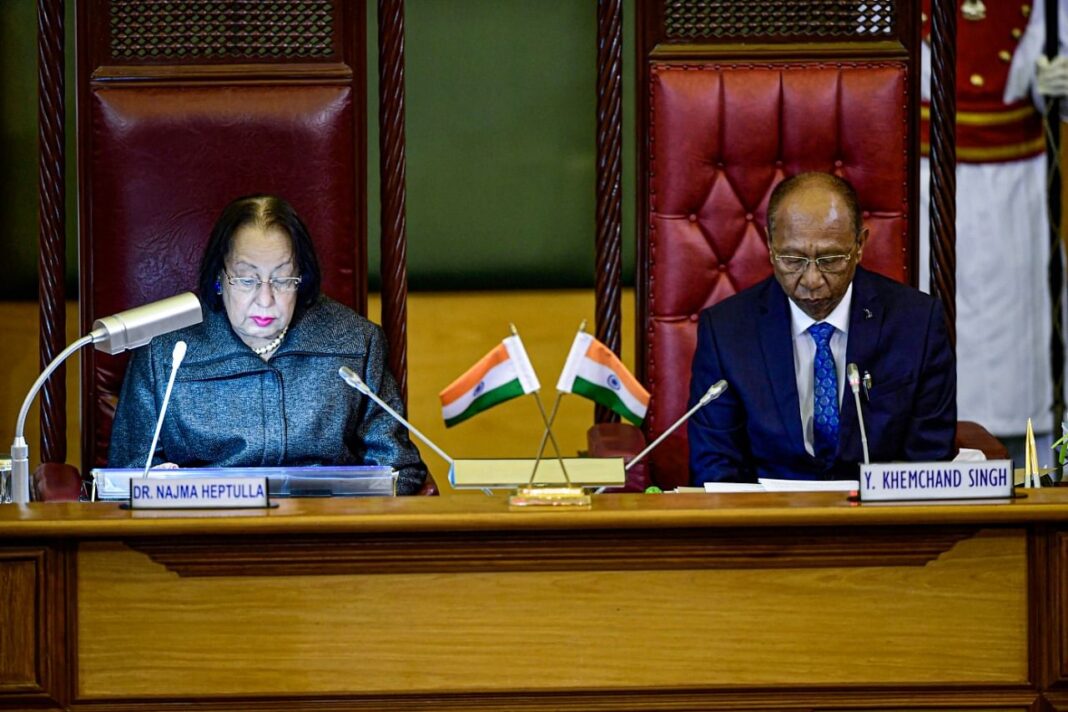 Manipur, Feb 3: Governor Najma Heptulla’s address to the House the 12th session of the 11th Manipur Legislative Assembly which was begun on Wednesday in Imphal.

During her address, Governor Heptulla highlighted the developmental work carried out by the present state government till date, including how the government has taken away forward measures that could restrict the damage the COVID-19 pandemic has inflicted.

As informed by the Governor, over Rs 9 crore was released from the State Disaster Relief Fund to combat the situation in the wake of the pandemic.

“With the commencement of the first phases of vaccination against COVID-19, I am optimistic that going forward, we will collectively be strengthening the pace of developmental works and efforts for the welfare and prosperity of all,” said Governor Heptulla.

While highlighting the state government’s effort to improve the overall security scenario of the state, the Governor further stated that the state was recently awarded as the most improved small state under the category for ‘overall’ and ‘law and order’ by a reputed media organization. Moreover, Manipur is the most innovative state amongst North-eastern states as per India Innovation Index 2020, released by NITI Aayog, she added.

At present, 68 surrendered insurgents are staying at Chothe-designated camp in Bishnupur district, including 16 who surrendered in 2020, informed the Governor.

Soon after Governor Heptulla’s address, MLA P Saratchandra moved the ‘Motion of Thanks’ to the Governor’s address, which was seconded by MLA Sapam Ranjan, advisor to the chief minister (health).

Later, Chief Minister N Biren Singh, who is also the House leader, presented the fifteenth report of the business advisory committee, 2021, and moved the report to the House.

As per the provisional calendar of the sitting issued by Manipur Legislative Assembly secretary Ramani Devi, the budget session for the fiscal year 2021-2022 will have 13 sittings, excluding Saturdays, Sundays, and Holidays. The 20-day long session will conclude on February 22, it said.

The Budget estimates will be tabled by the chief minister N Biren Singh, who also holds the Finance portfolio, on February 5, followed by a general discussion on the budget estimate on February 6.