Home Assam 11 rhinos dead due to flood in Kaziranga 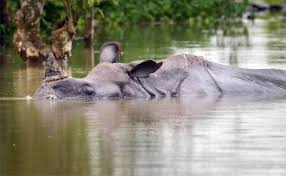 11 rhinos and 105 other animals died in Kaziranga flood

Guwahati, July 21: The flood situation in Kaziranga National Park in Assam worsened again after the floodwaters inundated 90 per cent areas of the world heritage site.

According to the Kaziranga National Park authority, the water was receding recently but it rising again since Monday evening.

“90 per cent areas of the park are affected in the deluge and 73 anti-poaching camps out of 223 camps are currently underwater,” an official of the park said.

116 wild animals including 11 rhinos have died in Kaziranga National Park due to flood this year so far.

The park authority said that, 9 rhinos drowned in floodwaters while two others died naturally during the flood situation.

The park authority and Center for Wildlife Rehabilitation and Conservation (CWRC) have rescued 143 animals including two rhino calves, 110 hog deer, four tigers, one wild buffalo, one wild boar, one swamp deer during the flood situation.

According to the Rhino Population Estimation report in 2018, the total number of rhinos in Kaziranga National Park counted 2,413 rhinos.

12 anti-poaching camps out of 24 camps of the wildlife sanctuary are now underwater.